I've heard about this, but didn't realize Chicago was a part of it. Seems a bit absurd. This is from the Chicago Board of Elections FAQ page...

Is it legal to wear campaign buttons or shirts into a polling place?

- Voters may not display buttons or shirts that promote or oppose a candidate or issue on the ballot in the "campaign free zone." That zone includes the polling place and 100 feet from the entrance. If a voter makes the mistake of wearing campaign buttons or clothes into the polling place, the judges normally advise the voter to put the buttons in a pocket or cover up the item of clothing, and after the voters take those steps, the voters are allowed to vote. 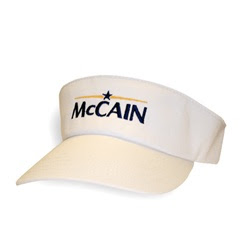 Mr. Hall has tagged me with a MEME.

1) I love 10cc. They were my band in high school and I am still fond of them. You've heard them. Their biggest hits were; I'm Not in Love, The Things We Do for Love and Dreadlock Holiday. They do have some suck ass albums out there, but if you stick to anything they put out in the 70's, you'll be okay.

2) I have never seen a Rambo or Rocky movie.

3) I wrote and performed my first sketch comedy revue in the fourth grade. It even included a fake newscast. This was pre-SNL.

4) My favorite trophy is "Super Saturday Champ" from Putt-Putt Golf Courses for winning a hole-in-one contest in Toledo, Ohio when I was eleven. It's tiny. Stands 4 1/2 inches high.

5) The only thing I have in my apartment to protect myself in case of a break-in is a golf club behind my bedroom door. I don't golf. Only putt-putt. I've never had to use it.

6) I once won a lip-sync contest as Phil Collins singing Can't Hurry Love and Su-Su-Sudio.

7) I used to get lost a lot as a child. I love to explore and will always be the one most likely to wander away from the group. When traveling, I'll always be up before anyone else and I'll put in a few hours walking around the neighborhood of wherever I am.

"73-year-old Freud de Melo of Brazil has built himself a tomb that features what?"

41% said "air fresheners"
- Nothing worse than being trapped by your own funk.

No one said "misters"

51% got it right with "megaphones"

According to The Wall Street Journal, under the shade of ficus trees stands the stone burial chapel that 73-year-old Freud de Melo built. Wind chimes tinkle above the wrought-iron door. But it isn't a conventional final resting place. Inside the crypt, there's a TV, also a water pitcher and a fruit pantry. Fresh outdoor air flows in through four vents from the chapel roof. Within reach of the coffin are two makeshift megaphones -- plastic cones attached to tubes running out through the wall. Mr. de Melo, a resort operator and politician, built a burial vault he could survive in because he's gripped by a rare condition called taphephobia, the fear of being buried alive.

I guess that's why we embalm here in America. Avoids those awkward pounding sounds during the funeral service. 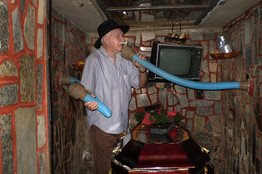