So, That's What A Community Organizer Does! 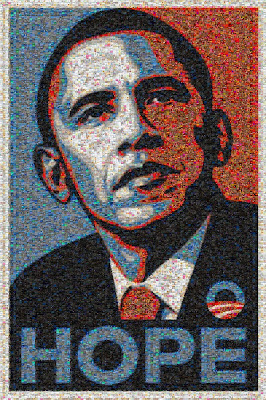 Sarah Palin and Rudy Giuliani can suck it.

It's not the Super Bowl. It's not "our team won, their team lost." It's not about winning the office pool one day and then going back to business-as-usual the next. It's more like we just spent two years interviewing prospects for the CEO of America and we, the board, after a grueling process, have made our choice. Now, we have to back him.

Obama proved that "hope" isn't just a campaign buzzword. He proved that it's a vision for the future. A vision that brings with it optimism. But potential is just that, potential. It doesn't mean anything without meaningful action. Barack has eight years of Bush/Cheney to untangle and he's not going to be able to do it alone. We need to help.

Yesterday, America woke up. By so decisively and unquestionably putting Barack in office by turning out in droves at the polls, we showed that we're sick of hiring people to run our country that care more about themselves than their country. We told the world that we're tired of giving our financial power away. We're tired of the dumbing down and fattening up of our children. We told the world that the smear campaigns and the parading around of Sarah Palin and Joe the Plumber like they were contestants on American Idol didn’t fool us. We're no longer buying the fear they are selling and instead we're investing in inspiration, leadership and wisdom. We're also showing the world that we really are smart enough to look beyond the color of a man's skin and his middle name.
But the thing about waking up is that, for it to be effective, we need to stay awake.

Today, celebrate. Tomorrows put on a pot of coffee and start figuring out how booting a lot of bad apples out of Washington is going to affect you on a day-to-day basis. What will you now do differently? How will you stay invested and engaged in America? How will we keep America on this track?

Bush has two and a half more months in office. He and Cheney are already doing whatever back-door politics they can to keep their corporate-friendly policies in play. Whatever activist muscle got built up in us to put Obama in the Oval Office needs to stay in shape.

But today, I party. I voted for a presidential candidate that I believe in. He's smart. He's inspirational. He's a leader. In a time of national crisis, he's not going to tell us to go shopping.

Today, celebrate. Tomorrow - roll up your sleeves, because now the work of change really begins.

"Lingerie maker Lucia Lorio of Brazil has outraged many feminists by creating a line of women's underwear that features what?"

37% got it right with "a GPS tracking system"

According to The Daily Mail, lingerie maker Lucia Lorio of Brazil says her design targets the 'modern, techno-savvy woman'.

The lingerie combination set consists of lace bodice, bikini bottom and faux pearl collar, with the GPS device nestled in the see-through part of the bodice next to the waist.

The GPS lingerie sells from a cool £500, complete with a standard Global Positioning System, to £700 with a more advanced model.

'Some women are now interested in buying it for protection,' she said, programming it for partners themselves so they are safe on a night out alone.

'In London, New York, Rio de Janiero - wherever there is danger, the underwear may prove to be a lifesaver,' she added.

But feminists in her homeland have called her a modern-day slaver and urged women to boycott the GPS underwear.

Ya' know, if your girlfriend is dressed like this, she'll be pretty easy to find. 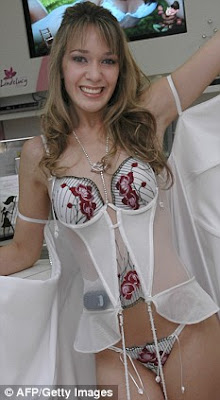 She'd be pretty easy or easy to find?

ok how did you get that picture of my wife?

I used the GPS system, of course.