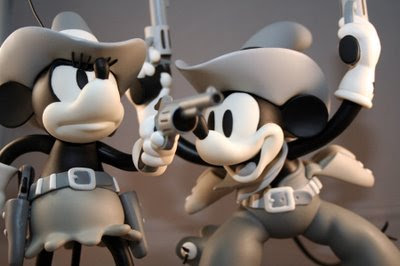 A staple of Locked in a Room with Don Hall and Joe Janes is the two of us periodically pontificating about whatever bird poo we scrape off our frontal lobes and wish to fling out onto the unsuspecting audience. Some of statements are silly, some of them are biting, some of them are thoughtful. Don has devoted Wednesdays to generating more "I Believes" and today, I jump on the bandwagon.

- I believe the NRA is a little too gun happy and should leave those of us who prefer to be gun free alone. They are currently attacking Disney World for not allowing their employees to keep guns in their cars. Come on Disney! This is America. Let your underpaid and underbenefitted employees pack heat. Why stop there? Let's just flat out arm all the Disney cast members. Let Snow White and Cinderella become the next Thelma and Louise. I want to see Goofy up on the castle taking pot shots at tourists. Turn the whole park into Frontierland. Let's make the "happiest place on earth" the "jumpiest place on earth."

- Who the hell listens to wacky radio morning show hosts and why? Their forced anti-clever dribble (for which they are quick to provide their own laughter) punctuated by many fast food commercials and quick hits of the "news" makes me want to rip out my eyes and shove them in my ears. I can see why it would be effective if you are using it to wake up in the morning, but I'd rather pay a homeless guy to scream in my face and kick me in the groin.

- I believe sidewalk dining in the summer in Chicago is for pretentious idiots. I hate how all the restaurants take up precious sidewalk space to offer outside dining. One - it's a pain in the ass for pedestrians. Two - who the hell wants to sit outside in a swirl of exhaust fumes, noisy traffic and beggars? Food tastes better this way? Whenever I am forced to eat outside, I end up hovering over my plate like a prisoner to protect it from falling twigs and bird poop.

"The Presidential Memorial Commission of San Francisco wants to rename what after George W. Bush?"

No one picked "The Golden Gate Bridge," "Alcatraz Island," or "War Memorial Opera House," even though that opera house seems to be begging for a catchier name.

100% got it right with "The Oceanside Water Pollution Control Plant"

According to The Associated Press, the Presidential Memorial Commission of San Francisco wants to switch the name of the Oceanside Water Pollution Control Plant to the George W. Bush Sewage Plant.

Supporters hoping to put the issue on the November ballot turned in more than 10,000 signatures to San Francisco election officials, organizer Brian McConnell said. The measure needs just over 7,000 valid names to qualify and McConnell expects to find out later this month whether they made it.

Proponents of the renaming plan see it as fitting tribute to a president they contend has plumbed the depths of incompetence.

"We think that it's important to remember our leaders in the right historical context," said McConnell, a member of the group that was formed after friends came up with the renaming idea.

"In President Bush's case, we think that we will be cleaning up a substantial mess for the next 10 or 20 years," he said. "The sewage treatment facility's job is to clean up a mess, so we think it's a fitting tribute."

I couldn't agree with these folks more. And I can see it opening the way for The Bill Clinton Memorial STD Clinic, The Ronald Reagan Senior Center and the George H. W. Bush Sanctuary for Delinquent Offspring.
Posted by Joe Janes at 7:05 AM

"Pretentious idiot" for dining outdoors? In my case, you may well be half right. I'm no idiot, but I am a firm believer that on the 20 or so nice days we get in Chicago each year, one must do all one can to make the most of them, including reading, working, drinking, exercising, balancing the checkbook and, yes, EATING outside. 4th of July weekend I had SIX (6) outdoor meals. It was a culinary experience of epic proportions and a gastronomical delight unparalleled in the annals fine dining. Now tell me, what's pretentious about that?

Well, pretentious may be a bit strong. I am not condemning all eating out doors. Only eating on the street sidewalk outside a restaurant where it is clearly a huge imposition on the purpose of said sidewalk. I can only imagine that the people who do it do so to be seen by the people not fortunate enough to be dining there.