What's Wrong with Lipstick on a Pig? 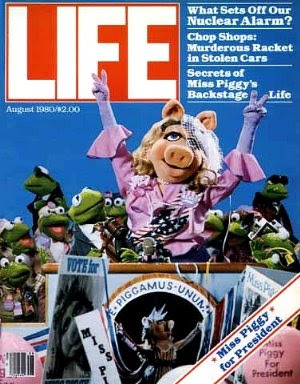 By now you have heard the petty name-calling and grade school insults that are becoming the standard daily fare of the presidential campaign. All very wearying and clearly a tactic to keep us from getting bored hearing the candidate blathering on about the issues.

Fun is fun, but Obama really crossed the line this week.

Last week, at the RNC, Sarah Palin made a reference to the only difference between a pit bull and a hockey mom is "lipstick." This was a brilliant display of Oscar Wildean wit on her part. Sophisticated and dry. While humorous, it was also a glowing tribute to pit bulls who like to breed and hockey moms who like to poop in the yard.

Less than a week later, Obama made a play at smacking down Palin and it was not nearly as clever. He referred to McCain's economic plan as "just putting lipstick on a pig." Several things are wrong with this joke. For one, if you are going to stick it to Palin, you need to at least refer to her. Just saying "lipstick" isn't enough. Nudge or wink or hold up a picture of her. The joke needs context! Secondly, it's stolen. McCain has already used the line several times, once in reference to Hillary Clinton and her health plan. Get some fresh material, Barack! Your lack of experience has made you so insecure that you are stealing other people's lines.

The joke that's even more insulting to Palin came after the lipstick reference and everyone is ignoring it. Immediately following the pig poke, Barack said that a stinky fish wrapped in paper is still going to be stinky eight years later. Clearly, Mr. Obama is going after Palin's personal hygiene with a crude comment such as this. She's from Alaska. She hunts moose. She's a tough broad. Things are bound to be a little funky down in Juneau, if you know what I mean. No reason to call it out. This, my friends, is where Obama really got sexist.

So, let's stop the shenanigans, Democrats! Enough is enough! Get back to talking about the issues. Like that swollen gland hanging off of McCain's jaw like rising dough. Or why we have to still hear Fred Thompson give speeches. Why aren't we talking about that stuff?

By the way, one more problem that I have with your "joke," Mr. Obama... What's wrong with lipstick on a pig? If a pig wants to improve his or her appearance with a little make-up, then I think that pig has a right to do so without being derided for it in a national forum. Or maybe it's work related. Maybe they are testing cosmetics for some big company. It's their job!

Leave the pigs, alone, Mr. Obama, or surely you will see my vote go for that old goat!

Today's is the day we remember that horrible tragedy and, if you swing that way, commemorate the fallen and the brave with some thoughtful, reflective silence or prayer. Unless you're a republican involved in a presidential campaign. Then 9/11 is your party's new mascot and you'll want to hit all the parades to remind people how terrifying dying is and how this kind of thing hasn't happened since all because they have been keeping you safe. Of course, they'll avoid talking about how they did nothing to prevent it in spite of numerous warnings and stood in a complacent stupor while it was unfolding. But I digress. Honor the innnocent and the brave.

36% said "On security metal detectors"
- Sorry, sir. I need you to walk through again. You missed reading the other side of the sign.

No one went for "On screaming children"

According to The Associated Press, New Zealand's national airline is offering to pay bald travelers to use their heads — literally — in a new advertising campaign.

Air New Zealand said it wants 70 recruits to stand in lines in three airports — while wearing temporary tattoos on the back of their heads so the displays can be seen by people lining up behind them.

The airline would pay 1,000 New Zealand dollars ($660) for each walking billboard, a company official said.

I should do this. I'm already giving away lots of free advertising with the back of my head. Other guys see me and think, "Hmm, maybe I should pick up some Rogaine."

i can see it now, your head would read