You're a busy guy. You probably haven't thought about this much. You've got a lot on your plate, what with Iraq and Afghanistan and Iran and Israel and Palestine and Russia AND the United States all clamoring for your attention. But I just wanted to remind you about your oath.

You know, the one you took when you were inaugurated. Both times, in fact. Same oath. They didn't change anything on you. Easy to forget, for sure. It's brief. Not very eloquent. Not the best work from those "We the People..." dudes.

The first time you took it, back in 2001, you were probably rushing through it since your limo had just been pelted with eggs. Check out the picture above. Good thing the secret service thought to erect that egg-proof plastic shielding. (And what's up with Mr. Chief Justice's freakish right hand? Looks like all the fingers are the same length. Even the pinky! Well, that's a whole other can of satan-worhsipping worms that I'm not ready to get into.) In 2005, when you took the oath a second time, you didn't have any eggs pelted at you, but you probably felt one pointed at you, much like an animal might sense being in the cross-hairs of a rifle. You probably rushed then, too. And there was certainly no incentive for you to read it in advance or learn it by heart. Rehnquist fed you all your lines. Bet you wish all your speeches were that easy.

Well, here I am to refresh your memory. You can look it up yourself. It's specified in Article II, Section 1 of our Constitution. Oh, you know what? Apparently you don't have a copy of that. Here's a website that will tell you all about it. It has lots of pictures. There's lots of interesting things about "checks and balances" and "doing the will of the people." Good stuff.

Mr. President - George, if I may - I strongly recommend you jot this down. Put it on a Post-It note and stick it on your desk where you will see it. Put it on your bathroom mirror so you see it first thing in the morning and at night before you go to bed.

Now, it could be that I am misjudging you. You probably heard about this oath thing and had Harriet Miers go over it with a fine-toothed laser-guided loophole-seeking comb. That "best of my ability" sure is vague, I concede. There's also that minor loophole of not really being elected president. You can probably try that "not a part of the executive branch" tactic Brainy Cheney tries when it's in his favor to claim so.

But if it's a case of you being aware of the oath and having your hand on the Bible really does mean something to you and you really are operating at the best of your ability to defend the Constitution, then all I have to say is... YIKES!

Please move over. Excuse yourself from the grown-up table. Take Cheney with you. We'll take it from here. The people, that is.

P.S. Glen Ford, a commentator over at The Black Agenda Report, has this message for Washington about your blatant disregard for the law of the land...

Impeachment, like all criminal processes, is designed not just to punish current lawbreakers, but to prevent future criminality. George Bush and his gang have been running a massive criminal enterprise for more than six years, effectively nullifying the Constitution. The Constitution does not automatically come back to life after the two top criminals leave. It must be enforced, or it is just an old, moldy piece of paper. The question is not whether there is time to impeach Bush and Cheney, but whether there is time to rescue the rule of law - domestic and international.

You can read the full article HERE.

I love The Simpsons, but sometimes I think it's shameless how far they will go commercially. They seem to simultaneously embrace and chastise selling out in America (Not surprising, considering they are a very subversive liberal show on FOX.)

This is hysterical, though. It looks like Cerne Abbas, the fertility giant, could use a Homer-sized doughnut for his, um, hunger. 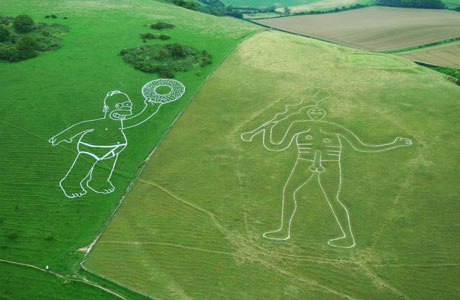 Posted by Joe Janes at 12:14 AM No comments: Links to this post