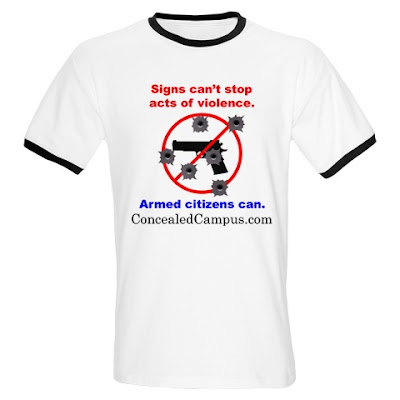 This from the Columbia Chronicle...

"If gun dealer Eric Thompson had his way, college students would carry more than just books.

In his vision, the next college shooter is thwarted by a student armed with one of Thompson’s guns—averting a massacre, saving lives.

Thompson’s Internet-based business, TGSCOM Inc., sold weapons to the shooters at both Northern Illinois and Virginia Tech universities. First, he said, he felt grief for the victims. Then, a sense of resolve. Not to stop selling guns, but to advocate for guns on campus.

“The perfect situation is that nothing ever happens like that again,” Thompson said. “... But in a last-ditch scenario, you are able to protect yourself.”

Now he is partnering with Students for Concealed Carry on Campus, a national group that next month will hold an “empty-holster” protest against university gun-free zones. Thompson will donate holsters to the group, adding a high-profile touch to a small but growing push for guns on campus.

Students for Concealed Carry on Campus, born after Virginia Tech, has grown to 22,000 members. And at least 14 states are considering legislation to allow concealed weapons."

You can read the rest of the article HERE.

This is, of course, a brilliant idea that I wholeheartedly, salivatingly endorse! You fight fire with fire. You stop violence with violence. And as this country has clearly demonstrated, you can only end war with more war. This is America, people! We have the right to bear arms and the right to education. Those are probably the only two left. Guns and ammo should be included with tuition.

And way to go, Mr. Thompson, on taking a bad situation and putting a smile on it. He has taken lemons and made bullets. And those bullets are for sale.

In Thompson and Concealed Carry's ideal state, mentally disturbed shooters would get a taste of their own lead-based medicine from students defending themselves. The only people who will get injured in this scenario are the ones who fail to duck in the crossfire. And, really, if you are not shooting back, you are a part of the problem.

What's even better, we can eliminate the loose canons before they even fire across our educational bow. We know the signs. Loner, video tapes himself a lot, wears black overcoats in the summer. Bad complexion. Never touched a woman's breast. Can be seen taking notes during Quinten Tarantino movies. You see one of them on their way to their "D and D" club, you are well within your right to pre-emptively defend yourself against that hormonal bomb.

I think we would also see a dramatic increase in the grade point average of college students. I know I will probably rate your work higher knowing that at any moment fifteen guns could be trained on my head. Date rapes would also go down in numbers as trips to the emergency room increase for a different kind of "painful discharge."

And thank God these students are organizing and protesting something really important to all of us. No point in protesting an illegal war. Those guys get to carry guns openly. I might join in on this protest, if only to get the free holster. I just don't like how my cellphone makes my front pocket bulge.

Of course, I would be remiss and a disappointment to Don Hall if I didn't tell Eric Thompson and Concealed Carry that they are a bunch of ignorant, volatile douchebags with the foresight and brains of a blind, rabid pit bull. If they have their way, they will cause many more unnecessary violent deaths than they prevent. I would like to shove their guns into their body's own backdoor holster. You may all, indeed, suck my balls.

"The United Arab Emirates, as a part of the Mazayin Dhafa festival, will be hosting a beauty contest for what?"

8% said "Buildings"
- "And here we have the Ahmed Savings and Loan in a Giorgio Armani two-piece swimsuit..."

8% said "Automobiles"
- "Keeping the chic in sheik, is this shimmering stretch Hummer..."

8% said "Mansions"
- "Who knew Assam's east wing could play the flute so well?"

According to the BBC, ten thousand camels will be fluttering their long eyelashes in a unique international beauty pageant being held in the United Arab Emirates. The contest in Abu Dhabi is one of the richest and biggest events of its kind, with more than $9m (£4.5m; 5.8m euros) and 100 cars in prizes up for grabs. Organisers hope it will remind Emiratis of traditional desert values.

Traditional values. You know, like making your camel look pretty for money. 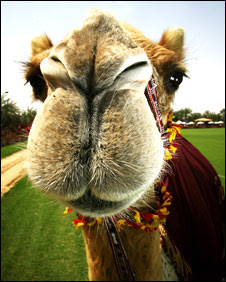 Posted by Joe Janes at 5:53 AM 6 comments: Links to this post