If You Don't Have Anything To Say, Shut The F@ck Up

As the Improv Program Coordinator at Columbia, one of the responsibilities to come under my guard is providing guidance and love for Improv Club. Improv Club is a weekly improv drop-in workshop open to any and all Columbia College students. Yesterday was the last IC of the semester and my goal was to bring in a reputable improv master for the students. I couldn't find a reputable one, so I called Don Hall.

Seriously, though, Hall was the kick in the pants these students needed to get them through their holiday break improv withdrawals. The man spouted improv wisdom like a sprinkler system on high. While observing him deftly and enthusiastically demonstrating and engaging the students to press to new levels of skill, I sat in the back of the room and tried to catch some of the nuggets flying about.

1) If you're not failing, you're not learning. Improv is disposable theater. Once you have done a scene, it is gone. If it didn't work, it's gone. Learn from it and take what you learn into your next improvisation.

2) Improv doesn't work most of the time. That's what makes it interesting and so wonderful when it does work.

3) If you don't have anything to say, shut the fuck up. Basically, don't talk in a scene for the sake of flapping your jaws and filling silence. Use the silence to explore and discover what the scene is about.

4) Hurt is more interesting than anger. Not that anger has no place in a scene, but hurt affords you more places to go. Anger, if used, is a place to build up to.

5) Go for what you want without ever asking for it. I have said this about writing. It's a dysfunctional playland. Drop hints, bribe, seduce, pull whatever tactic you realistically can to go for what you want. But once you directly ask for it and get a response, the scene's pretty much over.

6) Say would you would say or do what you would do. Pretty simple. Many of us to use improv to fulfil our fantasies of what we would really like to say in situations and that is possible, but it's a place to build up to. Start with what you would do or say.

7) A third entrance can be tactically used to heighten a scene. It can do this by directly engaging the other two scene partners by being in relationship with them or it can do so by fleshing out an unknown environment.

I probably missed about a dozen others. It was a good reminder for me that, as a teacher, I learn a lot by watching other teachers.

I would so run out of dollar bills at this place. Can't wait til they remake Flash Dance with robots. Anyone up for Flash Drive?

"The world's first zero-star hotel has opened in Switzerland inside a converted what?"

30% said "sewer"
- They cater only to mutated martial arts turtles going through puberty.

30% got it right with "nuclear bunker"

According to The Sun, beds are on offer for just £6 a night at the world’s first zero-star hotel — based in a converted nuclear bunker.

But guests at the no-frills establishment will have to put up with hot water bottles rather than central heating.

And they will be given a pair of earplugs to help blot out the racket from the ventilation system.

Standard beds at the austere Null Stern (No Star) hotel in Sevelen, near Zurich, Switzerland, are military-style bunks.

Complimentary slippers are provided for walking across the icy concrete floors — while customers enter a draw to decide who gets the luxury of a hot morning shower.

And with no windows, the only view of the outside world is via a row of monitors in reception.

What they don't explain about the shower, is that you get hosed down and scrubbed by two guys in hazmat suits.

This sounds like it would be fun for about one or two hours on the first night. The novelty would wear off rather quickly. Here's a patron leisurely reading about better hotels he could have stayed in if he had ponied up the money. 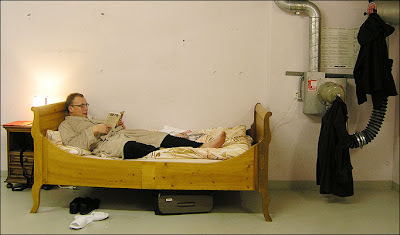 Posted by Joe Janes at 6:30 AM 2 comments: Links to this post