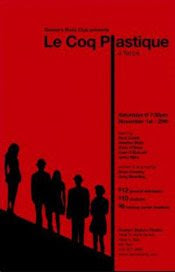 Saturdays at 7:30pm at Donny's Skybox

(Disclosure: Greg Wendling is a member of Robot vs Dinosaur and Brian Crowly formerly so.)

Well, first off, so Don Hall will keep reading, this is not a farce. If anything, it is, as one of its press blurbs describes, an existential farce. But I hesitate to say that in case anyone interpret it as meaning, "Oh. It's a farce without the comedy." Nope. That's not it, either.

Le Coq Plastique lives in its own unique world wedged between being a short one-act play and being a sketch comedy revue.

As a sketch comedy revue, it breaks a lot of rules. We don't meet everyone in the show until the third scene. And then, we don't see the whole cast on stage together until the middle of the show. There's no big flashy opener, there's no big toe-tapping closer. There are sketches, though. Sketches interspersed between a main storyline. The sketches themselves do nothing to forward the story, but do illuminate us about the main characters.

As a play, it doesn't take itself too seriously and makes one feel as though they spent the evening at a small cocktail party at Rob and Laura Petrie's home. 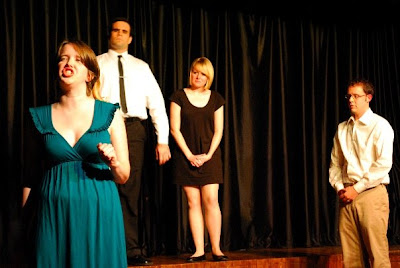 This form seemed to throw the audience off a bit. It took a good 20 minutes for them to warm-up to the characters and stories unfolding on stage. It wasn't fitting the mold of what one would expect from a Skybox show, especially if it was chosen as an alternative to the sold out Second City sketch revues on the first floor of the building.

In spite of the presence of a very effective phallus, this is a clean, intelligent sophisticated comedy. The "play" takes place in the late 1950's, serving to heighten the upset with, at least our notion of, that day's gender and societal roles. The cast is also professionally and elegantly dressed which I think helps bring the audience along.

The cast is exceptional. Nick Cutelli, Heather Muth, Katie O'Brien, Evan O'Donnell and Annie Rijks all seem to get that they have one foot standing in a play and one foot standing in a sketch revue. Their commitment and emotional investment propel the story into fun Ionesco absurdism. if anything doesn't serve them, it's the space. I think the piece would be better served in a small theater with a grounded, simple set.

"Orthodox priest Vitaly in the central region of Russia has complained to police about the theft of what?"

55% said "innocence"
- I think that happened several thousand years ago when someone stole some fruit from the tree of knowledge. Kind of blows that you steal some knowledge and all that you learn is that you are naked. You think you'd at least get enough smarts to build a car or something. At least be able to knit a sweater. Sticking a fig leaf on your weenie ain't exactly high learning.

According to The Associated Press, Orthodox officials in a central Russian region say an abandoned church building that was to be put back into use has been stolen by local villagers.

Orthodox priest Vitaly of the Ivanovo-Voskresenskaya diocese said officials last saw the two-story Church of Resurrection intact in late July. Sometime in early October, however, people from the nearby village of Komarovo, northeast of Moscow, dismantled the building, he said.

Villagers apparently sold it to a local businessman, one ruble (about 4 cents) per brick, Vitaly said. Orthodox priests use only one name.

"Of course, this is blasphemy," he told The Associated Press. "These people have to realize they committed a grave sin."

In the meantime, pictures of the church have shown up on the sides of cartons of goat's milk and officials have issued a myrrh alert.