Sadly, George Carlin has passed away. At 71 years old, he is a successful comedian who did NOT mellow with age. I was fortunate - or perhaps not fortunate - to have parents who didn't care that I listened to his albums. I could name the seven words you can't say of television (at the time) long before I could name the first seven presidents. In fact, don't quiz me on that. I still know one much better than the other.

A very important comedian. He took what Lenny Bruce started and made it, well, funny. He laid a foundation for Jerry Seinfeld and David Brenner by talking about the things we all think about, but don't even realize we think about it. He opened the door for Sam Kinison by not backing off from issues that pissed him off.

I saw George Carlin in person when I was a senior in high school at the Toledo Masonic Auditorium. It was the end of the seventies and, although thrilled to death to see him, you could see him beginning to tire of his "chestnuts" and the 80's would see him starting to reinvent himself through books and HBO specials. He never tried to be someone he was not. Even in his 70's, he was comfortable being an "old fucker" and had a very pragmatic view of the world.

Here's hoping he's looking up yelling at us.

"Sega has created a new robot that they are marketing specifically to whom?"

No one said "Mining Companies" or "Hospitals"
- That's way to sensible!

10% said "Marketing Firms" - They already use robots. Who do you think writes their copy? Humans?

90% got it right with "Lonely adult men"

According to The New Zealand Herald, a Japanese firm has produced a 38 cm (15 inch) tall robotic girlfriend that kisses on command, to go on sale in September for around US$175, with a target market of lonely adult men.

"Strong, tough and battle-ready are some of the words often associated with robots, but we wanted to break that stereotype and provide a robot that's sweet and interactive," said Minako Sakanoue, a spokeswoman for the maker, Sega Toys.

"She's very lovable and though she's not a human, she can act like a real girlfriend."

Well, at 15 inches tall, she's not going to be able to do everything a girlfriend can do. Like laundry! 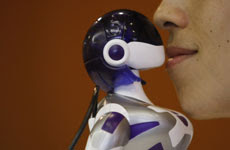 Posted by Joe Janes at 8:30 AM No comments: Links to this post