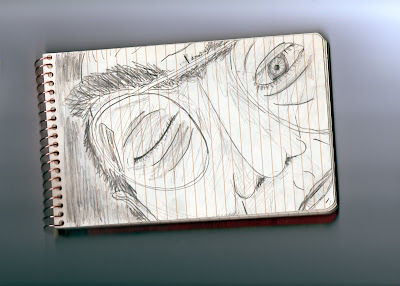 This was another one that started with some random squiggles and became...that. I like the nose hairs. 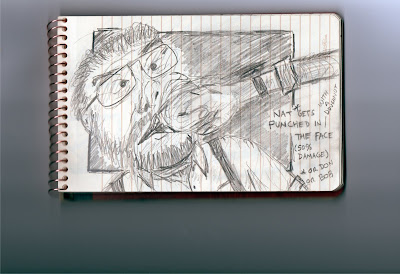 In the Wednesday night Nighthawk Sandwich show there was a scene Mary Jo Bolduc wrote called Private Dancer based on Hopper's Girlie Show. In it, Nat Topping gets punched in the face. The night Nat came to see our show, I decided to try to capture it. It looks less like Nat Topping getting punched and more like Don Hall getting slapped with a doughnut. The "50% damage" is an inside joke. When they would run the fight choreography before each show, the actors would do so at slower rates of speed, building up to 100%. This is a 50% sock in the kisser. 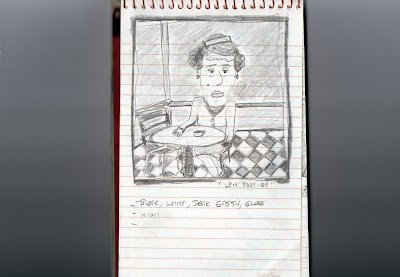 Back to my favorite use. This is Len in the Automat, post-op. He seems to regret his decision. 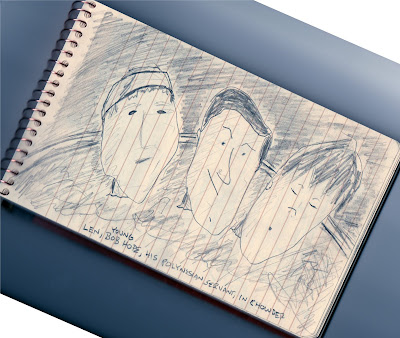 Another one that started with squiggles. I thought it was going to be three lemons. Turned out to be Len, a young Bob Hope and his Polynesian servant, sitting in a big tub of chowder. 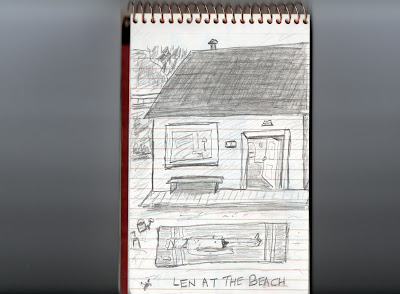 Len at the beach. There's sun screen on his huge beach towel near his head. Len burns easily. 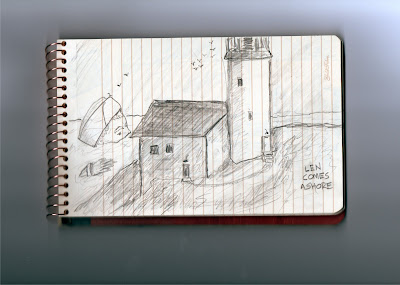 Len Comes Ashore just may be my favorite. Len was the last thing added. It was just the lighthouse and the landscape. Very boring. Want to spice up a work of art? Add Len and make it weird. If I had a tattoo, it would say "Make It Weird." 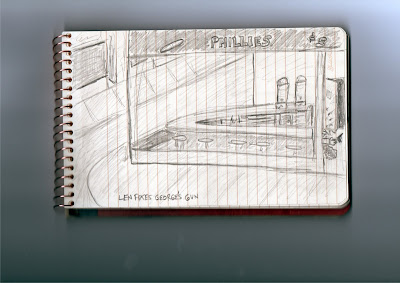 Seemed only fitting that for the very last show I take a stab at Nighthawks. I intentionally did it without people in honor of the show closing. But then, I couldn't resist. Len is lying in a pool of blood behind the counter. The reference is to an early scene where George, a businessman, contemplates suicide and finds his secretary has removed the firing pin from his gun. I imagined Len fixing it for him.

If you saw The (edward) Hopper Project, I hope you enjoyed it and this glimpse into a part of it. If you didn't get a chance to see it, I hope you regret it deeply and on your deathbed whisper "Hopper" as you drop a snowglobe from your dying hand.

"Peta has developed a new billboard with the message to 'spay or neuter' cats and dogs. The celebrity on the ad is who?"

25% said "Wolf Blitzer" - We must keep that beard from overpopulating the planet.

No one said "Cat Stevens"

According to The Huffington Post, Tiger Woods may soon appear on a PETA billboard in his hometown of Windermere, Fla. The animal rights group has created a graphic showing a photo of the golfer accompanied by the all-caps text, "TOO MUCH SEX CAN BE A BAD THING." The message continues beneath the headline: "... for little tigers too. Help keep your cats (and dogs) out of trouble: Always spay or neuter!"

The problem is, Tiger probably has been fixed. We haven't heard any rumors of any stray tiger cubs popping up around the strip clubs he haunted. Then, again, maybe the ad is saying it's a good thing if you're going to keep screwing around. If you're going to get into trouble, don't make it any worse. Looking at you, John Edwards.