...that there's a rush to being so into someone that you physically ache when they are not around, that you seem to only think about the next time you'll see them and you're totally willing to spend money better spent elsewhere and forgo the sleep that you need because you just can't shake that person. Is it love? Remember, you said the same things about cigarettes.
...that sleep happens.

...that there's an opportunity this election year to tell the gluttonously rich "less government is better -for us" CEOs that the millions and millions and MILLIONS of dollars they're pouring into campaigns to tell me I was better off under Bush and they can get the country back on track (we're off track?) to fuck off. This country is not for sale...anymore. 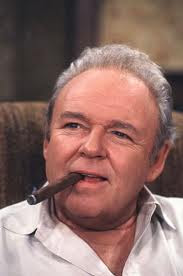 Edith Bunker: This is a nice restaurant, and it's called the Gay Paris.
Archie Bunker: Gay, gay, what'd you do? Bring us into a fag hangout?
...that if a character says something inflammatory in a film or play or television show it is not necessarily an endorsement of that sentiment. Referring specifically to the flack Vince Vaughn is getting for his character in the film The Dilemma saying "That's gay." For one thing, the comment is being taken out of context. If you haven't seen the movie, and I haven't, you don't know how that comment reflects on his character or society. I am not defending the derogatory use of the word "gay." I am saying, in context, in comedy, in telling a story, it may be appropriate and actually highlight why not to use it in such a way. For examples, watch the first few seasons of All In The Family. It is brilliant satire that uses a bigot as its main character to highlight the ignorance of bigotry. Archie Bunker would not be allowed to exist on television in today's world.

...that we tell each other stories to help us live a better life and some of our best story tellers aren't doing hit TV shows or blockbuster movies or anything on Broadway or best-selling novels. They're in comic books, cable, Netflix, storefront theaters, independent book stores and bars.
Posted by Joe Janes at 7:47 AM No comments: Links to this post