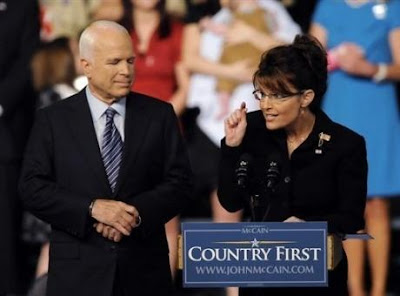 (Palin reveals she learned a lot about McCain during the vetting process. J.D. Pooley AFP/Getty Images)
You have to hand it to McCain. He sure knows how to use his military experience on the campaign trail. A year ago, he was a tenacious lone wolf, broke, eating "c" rations on the campaign trail, thumbing rides from speaking engagement to speaking engagement. Now look at that scrappy old man. On Thursday night, 38 million people - and that's just in this country - watched Obama give one of the best acceptance speeches of all time. On Friday, McCain lobs his VP bomb and look at what everyone's been talking about since Obama's landmark speech.

Left wing bloggers and commentators have been going nutty over McCain's VP choice. They are saying he only did it to try to get Hillary's disenchanted supporters. They are also saying that women in America aren't dumb enough to just vote for someone because of their gender. And they are right (although, you must grant me the appeal of two penisless candidates on one ticket.). But that doesn't make McCain's choice wrong. They just missed his intended target. McCain wasn't going after the female voter population with Palin. He's going after 18-year-old men who are at their sexual peak and will be voting in their first presidential election. Genius!

Palin is a hottie. McCain did get a bump in the polls. A bump caused by the simultaneous "schwinging" of potential young republican boners. If McCain is smart, he'll keep her in those tight black business outfits with the pulled back hair and glasses. But do keep her speaking opportunities to a minimum. It ruins the fantasy when you expect to hear Tina Fey and get Archie Bunker. Send her out to as many colleges and high schools as you can. Get her speaking to as many young men as possible - Boy Scouts, Athletic Clubs, Dungeons and Dragons Tournaments. Teach her to speak a little more whispery and pepper her talking points with phrases like "the politicians in Washington have been naughty," "I'm here to discipline the economy," "Those tax and spend democrats need a spanking."

So, don't be surprised come election day when you see a long line of coming-of-age men spending a little extra time in the voting booth "pulling the lever" for McCain-Palin.

"An Italian museum has defied Pope Benedict by refusing to remove a statue that depicts what?"

No one said "Pope Benedict flashing his holy bits"
- "The body of Christ compels you. What does my body do for you?"

42% got it right with "a frog being crucified"

According to The Evening Standard in London, an Italian museum has defied Pope Benedict by refusing to remove "Zuerst die Fuesse" (Feet First), a statue of a crucified green frog clutching a beer mug and an egg.

The Vatican had condemned the modern art sculpture as blasphemous.

The board of the Museion museum in the northern city of Bolzano voted it was a work of art, however. Museum officials in the northern bi-lingual Alto Adige region near the Austrian border said the artist, who died in 1997, considered it a self-portrait illustrating human angst.

The Vatican wrote a letter which said the work "wounds the religious sentiments of so many people who see in the cross the symbol of God's love".

The crucifix is the symbol of God's love? Jesus looks pretty tormented in all the crucifixes I see. Looks more like pain and suffering to me. Wait - that's how I do love. Lesson learned! Thanks, Pope! 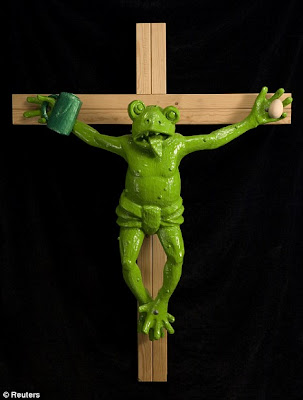 Maybe a beer and an egg will replace that wafer and sip of wine at communion. If a parish is looking to fill the pews, that would help.
Posted by Joe Janes at 5:35 AM 1 comment: Links to this post