Hopper has closed and, like our many reviews, my feelings are mixed. Don't get wrong. I loved doing the show and I loved working with this cast. It was a tremendous amount of fun. It was also a five day-a-week commitment for me, not including pre-production. The weekends were particularly taxing with my teaching schedule at Second City. I'm ready to move on and looking forward to getting out there and seeing some shows.

In the show, I played a Hopper substitute named "Eddie." Eddie was far from being biographical, but I did try to emulate his approach to art. He would stare at things for hours before painting and kept a sketchbook to develop his work before applying paint to brush. My Eddie kept a sketchbook in his back hip pocket. Once a show, I made a sketch. At first, I tried to recreate something Hopper might draw - a landscape or cityscape or something based on one of his classics. Then, I got silly. Often using "Len," the diner owner/operator, as my muse.

Here are a few... (click on the image for a closer view) 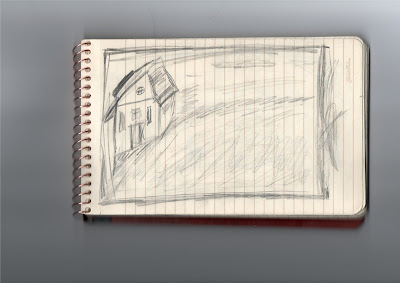 This is the very first one in the book. It might even have been done on opening night, as I went through a few different sketchbook options. As you can see, I was trying to take my role seriously. 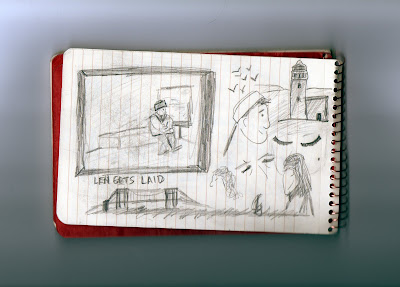 This is the first appearance of Len about three shows later. It's based on an actual Hopper painting where there's a fully clothed man sitting on the edge of a bed and a naked woman reclining behind him. I gave the sketch the title "Len Gets Laid" and then thought it would be funnier if I erased the woman. 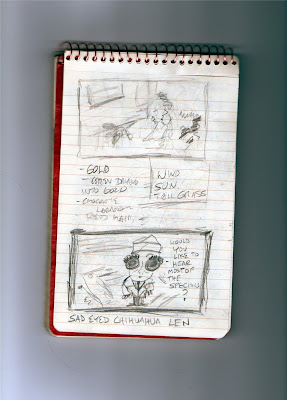 This is where I started becoming frustrated with my lack of talent as an artist. I really wanted to do a great "Sad-Eyed Chihuahua Len." Unfortunately, the idea is better than the result. 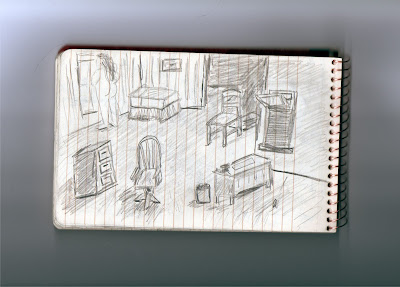 Hopper liked his naked ladies and his actual sketchbook is full of him practicing drawing them. The stuff that would get you kicked out of most high school classrooms. Here's my attempt. And then I had a bunch of space left, so I decided this naked lady worked out of her home.

"Fraternity students at the University of California - San Diego threw an off campus party last weekend commemorating Black History Month that encouraged guests to do what?"

I clearly loaded the answers on this one, because the story pissed me off.

"For girls to have gold teeth, start fights and wear cheap clothes"

"For everyone to enjoy dat Purple Drank made of the color purple, chicken and watermelon"

According to San Diego's 10News.com, administrators at the University of California, San Diego are condemning a weekend ghetto-themed party thrown off-campus by fraternity students to mock Black History Month, but they aren't likely to discipline anyone, it was reported Wednesday.The so-called "Compton Cookout" event urged all participants to wear chains, don cheap clothes and speak very loudly, The San Diego Union-Tribune reported. Female participants were encouraged to be "ghetto chicks."

What a bunch of ass bags. There are three things more than anything that I just do not get; litter, being loud on buses or trains, and racism. Okay, those weren't in order of importance, but I think they all are related. The perpetrators are all people who falsely feel a sense of entitlement and use these tools of disruption to feel superior, which, of course, they are not. Such acts put them squarely at the bottom of the pecking order. People are racist. Seems to be built in or passed down. But that doesn't mean you can't rise above the baseness and use your brain and treat everyone with respect and humanity. Seriously, what a bunch of friggin' ass bags.
Posted by Joe Janes at 7:51 AM 7 comments: Links to this post