Sleep is for Pussies

It's been a glorious and exhausting slog to get Metaluna to the point of performing in front of an audience. We had our first preview last night. An hour before the show, there were still so many little details to get handled just to even feel comfortable allowing people into the theater. In retrospect, we could have let them in as soon as they got there and claimed that helping us move power tools and sweep up sawdust was all a part of an interactive experience.

Regardless, things went very well and our guests enjoyed themselves immensely.

Tonight's preview is an opportunity for the understudies to come in. We don't all have understudies, so its really only a shift in three of the major characters. In previous productions, I usually warn people not to come on nights with an understudy, but such is not the case here. The fill-in people are really great and bring their own unique spin to the roles while still effectively carrying on with the tenor of the play.

"Hanson's Auctioneers in England are set to auction off a pair of bloomers that belonged to whom?"

25% said "Margaret Thatcher"
- I can see someone bidding pretty high if should they need the scrap metal.

25% said "Winston Churchill"
- Not for the faint-hearted. You saw what Germany did to London in WWII. You can imagine what Churchill did to his bloomers during that time.

12% said "Madonna"
- Um, yeah. You can go to the auction or head over to Home Depot for a pair of her undies.

38% got it right with "Queen Victoria"

According to BBC News, a pair of bloomers that apparently belonged to Queen Victoria are to be auctioned off in Derby.

The knickers have a 50in (127cm) waist and date from the 1890s, which indicates the monarch had a large girth as she approached her 70s.

Hanson's Auctioneers are selling the bloomers on 30 July and expect them to fetch at least £500.

Here are the bloomers. They will be a bargain at any price, because, as you can see, they fit two. 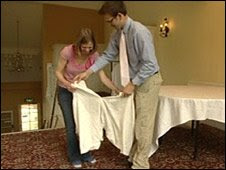