(Lights up on John and Linda walking holding hands along an urban street.)

I love having the afternoon off.

Me, too. I wish we could afford a whole weekend getaway.

Well, we might just be a small step closer to fulfilling your wish. Look. A penny.

(John bends to pick it up, Linda stops him.)

Find a penny, pick it up. All day long you’ll have good luck.

Not when it’s tails up.

What does that matter? A penny’s a penny.

We’re just talking about a penny. The lowest coin on the currency food chain doesn’t get to determine my good or bad fortune. At the very least, it’s good luck, because I’ll be a penny richer than I was before. It’s not much, but it’s a point in the right direction.

My mom always told me upside down pennies are a message from someone from the spirit world. Like a dead grandma or something. Heads up means they are with you and looking out for you. Heads down, and they have an issue with you.

Are you saying my dead grandmother has a problem with me?

Maybe? I never met her.

Maybe her problem is with you?

Why would your dead grandmother have a problem with me? I’m the best thing that’s ever happened to you.

That’s ridiculous. It is, as you said, just a penny. We could walk away from it. Who cares about being a penny richer?

(Karen, a homeless person, walks up to them.)

Excuse me. I lost my job and am homeless. Can you help me out? I’m trying to get something to eat.

There’s a penny here on the sidewalk.

(Karen shrugs and picks it up. Ted, a well-dressed businessman enters followed by Janice, his assistant.

Excuse me. I know how ridiculous this sounds, but I really need a penny. I don’t carry any cash, coins, especially, offend the lining of my pockets, and I just made a bet with another playboy billionaire about whether or not a pigeon in the street would actually peck at the remains of a car-flattened dead pigeon. It did, the filthy cannibal. So, I owe him a penny. If I don’t pay up in the next five minutes, as per our rules, the debt goes up to a million. I know, I know, boys will be boys, right? So, any way, if you have a penny, I will gladly have my secretary write you a check for one thousand dollars.

Thank you. You have made my day!

You made mine, too.

(Ted and Janice exit. Karen turns and smiles at John and Linda.)

Thanks for the penny.

(She exits. John looks at Karen.)

My dead grandmother was right about you.

Posted by Joe Janes at 7:47 PM No comments: Links to this post 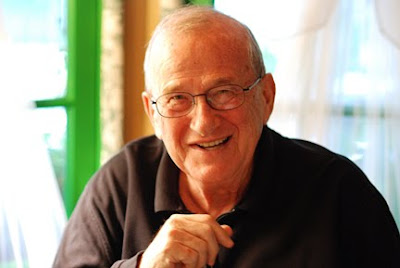 One of my heroes passed away today. Larry Gelbart is perhaps best known for developing "M*A*S*H" for television and being its shepherd for its first five years. He was also one of the brilliant writers for the groundbreaking Sid Ceasar back in the 50s. He is comedy history and wrote up until his death.

I raise an imaginary dry martini made from a makeshift still in your honor, Mr. Gelbart. Thank you for your contributions to American humor and for being such an inspiration.

(Photo by Sasha Gelbart)
Posted by Joe Janes at 5:52 PM No comments: Links to this post