WEEKS 31 & 32 – “A Thing I Wrote“ – Director: Chris Othic
I have known Chris Othic for years. he was once a student of mine at Second City and wrote one of my favorite scenes, James Bond from Milwaukee. It was one of those rare scenes where I had no idea how we would do it - it had a helicopter, grappling hooks, beer cans used as weapons, a helicopter crash - but it was so much fun I just had to try. Chris went on to work with me in Teatro Bastardo and now with Robot vs Dinosaur. We don't always see eye-to-eye, which is a good thing, because he's always interested in the doing the best work possible. He is also the engine of Robot vs Dinosaur. His dedication and self-professed "mothering" of the group is our glue. He is also one of the few people who have read every single 365 scene. So, I know his choice for these two weeks is an informed one. This block features quite a variety, including an Odd Couple take on Othello, a Sherlock Holmes take on a drive by shooting, a parody of A Tale of Two Cities, another parody of King Kong based on what I always wondered would happen if he didn't escape from the theater and Wasp-18, about a lovelorn, suicidal planet, a scene that was reference in a lecture at The Royal Academy of Astronomy in London.

"Beppe Bigazzi, a top Italian food writer, has been suspended from a cooking show for recommending viewers try what?"

40% said "McDonald's" - Only so they know what really crappy food tastes like and better appreciate his cooking.

20% said "Doggie Foie Gras" - It only works on chihuahuas.

According to Times OnLine, a top Italian food writer has been suspended indefinitely from the country’s version of the television programme Ready Steady Cook for recommending stewed cat to viewers as a “succulent dish”.

RAI, the public broadcasting network, said that it had dropped Beppe Bigazzi, 77, for offering the recipe on La Prova del Cuoco, which is broadcast at midday on the main channel. Its switchboard was inundated with complaints from viewers and animal rights groups. Bigazzi said that casserole of cat was a famous dish in his home region of Valdarno, Tuscany.

“I’ve eaten it myself and it’s a lot better than many other animals,” he told viewers. “Better than chicken, rabbit or pigeon.”

Better than pigeon? Haven't tried the rat pate, yet, Beppe? 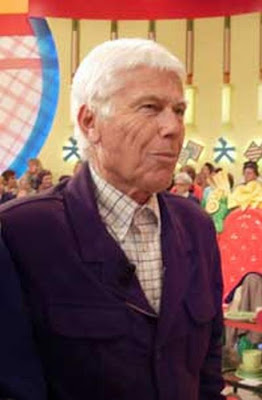 This man has eaten cat. I think he's still chewing.
Posted by Joe Janes at 6:09 AM 2 comments: Links to this post