The presidential campaign is in overdrive and overload. Be sure to take a moment to turn everything off - TV, radio, computer - hide the newspapers. Take a deep breath. Listen to the silence. Smile at picturing a gaggle of hypoallergenic kittens playing with string. Or picture your favorite naked person naked. Or a hearty sandwich. Whatever provides an instant smile.

Now, get back to work.

Directed by Jason A. Fleece. Gloriously performed by Kristen Secrist, Ian Custer and Mike Johnson. Scripted by me. Love! Romance! Exclamation points! It could very well be the most important 10 minute play ever conceived and delivered for your amusement.

Three shows left. Saturdays at 10:30pm. It's a part of the Best of The Tens collaboration between Second City and Chicago Dramatists at Donny's Skybox. I strongly recommend buying your tickets in advance. You can get all the info you need by clicking HERE.

"Animal rights groups are outraged over an upcoming festival in Peru called what?"

62% said "Llamapalooza"
-It's the stage diving that most concerns PETA.

25% said "The Hamster Shoot"
- It's only fair if you give the hamsters guns, too.

No one said "The Seal-A-Bration BBQ"

13% got it right with "The Gastronomical Festival of the Cat"

According to The Sun, animal rights groups are up in arms over an annual festival in Peru that serves up hundreds of fried CATS to locals.

The 'Gastronomical Festival of the Cat' – dubbed the 'Massacre of the Moggies' – sees townsfolk in Canete, near Lima, feast on the fluffy pets for two days.

They believe that eating cat burgers – and fried cat legs and tails – can cure bronchial disease.

It is also believed that feline meat serves as an aphrodisiac.

Remember those kittens you pictured earlier playing with string. Now picture them slathered in BBQ sauce. With cole slaw on the side. 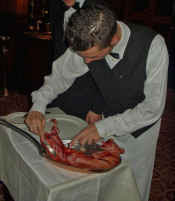 At least I didn't make any joke about eating- well, you know...
Posted by Joe Janes at 5:59 AM 1 comment: Links to this post