Squonk If You Love Fairy Tales 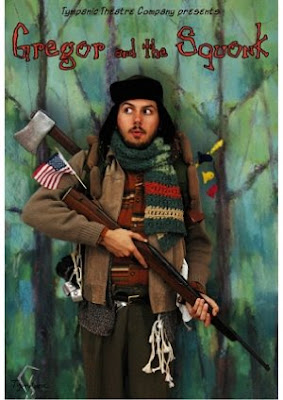 Tickets are Pay What You Can!
Email tickets@tympanictheatre.org to reserve your tickets

Gregor and the Squonk sounds like it's a play about Gregor and the Squonk, but it is not. I'm not exactly sure what it is about, but it's not that. I felt like I spent more time with Gregor's wife Margaret (Ali Delianides) and her doctor (McKenzie Gerber) than I did with either Gregor or said Squonk.

There's a lot of creativity going on in this production. Tympanic puts a lot of thought into costumes and effects. And I commend them for their use of space. Characters pepper themselves throughout the lobby as you make your way through the Village Thrift store-like environs of the Bailiwick in transition. Getting to the tiny loft space is like an adventure in and of itself. Director Susan Myburgh uses this well and uses the limitations of the space to her and the cast's advantage.

The story deals with Gregor's wife, whom he loves very much, but she doesn't get it. She thinks she's ugly and is doing all sorts of stuff, including having a resident plastic surgeon on hand, to get the hands of fate to lay off. To try to appease her, Gregor has gone off in search of a mythical creature that, if consumed, will turn his wife beautiful. Kind of a cool story with a lot of potential as a cautionary fairy tale for grown-ups, but the play never lives up to its promise.

Daniel Caffrey's script has many long, repetitive scenes where characters spend a lot of time arguing and yelling and not moving things forward. Daniel is very active in Chicago's improv community and it would do him well to apply what he knows to his writing. Strong improvisers know to avoid or move through arguments, have strong, clear objectives of what they want from other characters, and, most importantly - show, don't tell. For example, as I mentioned earlier, Gregor is very much in love with his wife, Maragret. How do we know that? He tells us. We never see it and because we never see it, we have a hard time buying it. The only scene between Gregor and his wife is near the end. Up until that time, we only see Margaret screeching, yelling, fighting and, occasionally, being forcefully sedated by the doctor. There's not a lot to love.

The strongest section comes when the doctor tells the story of his mother's own struggle to see her own beauty. He thoughtfully tells the story while Whitney Valencia shows us the woman's pain. Some powerful moments and the longest stretch in the play where no one is bellowing.

Almost making the evening worthwhile is Megan Gotz' performance as The Squonk. She's brilliantly emotionally invested while also being very playful and childlike. She brings the play to life on her entrance and makes you feel like you really are encountering a mythical creature. Her costuming and make-up are also another example of how very creative Tympanic can be. Unfortunately, her scene with Gregor also falls into the category of needing editing and boasting way too much yelling. This scene also fails to play the reality of the situation. Gregor is out to kill a beast, much like he would a muskrat or any other animal. Yet, he shows no surprise at The Squonk's command of the English language. The Squonk also begs Gregor to tell her a story because she's never heard one before. If she has never heard one before, how does she know what a story is? There's potential to really explore a relationship here - the hunter and his prey that talks back, the man using the life of someone else for his wife's vanity, etc - but we never go there.

Caffrey sets out to bring us into a Neil Gaiman-esque world, but doesn't do his work on crafting the story and characters. The women get the shaft by only being portrayed as crazy and obsessed. The men love them, but for no good reason that we can see. There's a lesson about the beauty myth here somewhere, but no one in the production gets to learn it. The creativity at work gives me hope for future Tympanic productions as long as they go back to square one - good story telling.

"According to NASA, astronauts returning from space walks report that space smells like what?"

30% said "coffee"
- Nope. That's just the aroma from the one millionth store Starbucks opened on the moon.

28% said "lavender"
- Space is just a big bowl of potpourri.

7% said "alien teen spirit"
- Really? Someone voted for that? You know that "No Child Left Behind" educational program? We should really leave a few kids at the curb.

According to The Sun, outer space smells of fried steak, scientists revealed yesterday. The universe also has an aroma of hot metal and motorbike welding, NASA experts said. Astronauts reported the bizarre scents on their suits when they returned from space walks.

He said: “When astronauts were de-suiting and taking off helmets, they all reported quite particular odours.

“We have already produced the smell of fried steak, but hot metal is more difficult."

Well, I can't wait for this line of perfumes and colognes to hit the market. Estee Lauder's Space Meat.

Posted by Joe Janes at 5:56 AM No comments: Links to this post