The Saga of the Saga 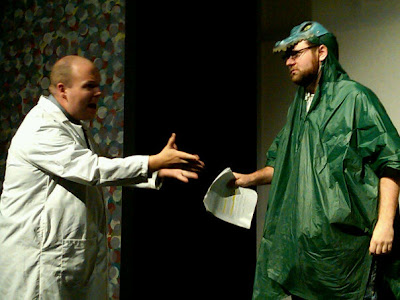 After three years of doing shows, RvD got its first review by one of the more established institutions in Chicago and if you weren't familiar with our work, it probably won't have you rushing to the phone to order tickets. Fair enough. Put up a show and invite reviewers to cover it, can't complain when they do. You can read the full revue by Albert Williams of The Chicago Reader by clicking HERE.

Here's my response to elements of the review...

"Comedy troupe Robot vs. Dinosaur crosses Roger Corman's 1957 drive-in potboiler, The Saga of the Viking Women and Their Voyage to the Waters of the Great Sea Serpent, with Marat/Sade, Peter Weiss's 1963 play about a group of lunatics--led by the Marquis de Sade--who put on their own show about the French Revolution."

What problem could I possibly have with the above statement? We're not a comedy troupe. We're no more a comedy troupe than The Neo-Futurists or WNEP are. We're a theater company whose core group is made up of comedy writers. We craft our scripts. When a show is ready, we pick a director and cast it. "Saga" has a cast of fifteen. Of those folks, four are company members. Our roots are in sketch comedy, for sure, but we strive to present more theatrical work.

"Despite occasional bright spots, the production doesn't follow through on its premise: The characters of the inmate-actors are never developed, so we're left with a limp send-up of a cheesy old movie whose main attraction was its cast of scantily clad, soaking wet babes."

We're doing a parody, here. Marat/Sade is our context and we swapped out the story of the French Revolution for The Saga of the Viking Women. The Marquis de Sade was a full-of-himself hedonist which seemed like a perfect swap for The Great Sea Serpent, who is worshipped as a god in the film. Our show, as presented, is about 80% "Viking Women" and 20% "Marat/Sade." We could have evened it out and spent more time on the inmate/actors, which would have made it a two-act show and probably deathly boring. The insane asylum is our way into the story and, ultimately, back out, with the serpent having his own uprising. To me, it's about The Great Sea Serpent, played by the multi-talented Nat Topping, and he has a story to tell with Orson Welles-like control. Everyone else lives in his world and is his puppet.

It bums me out that Albert didn't like the show more. I think it's a ton of fun. It's filled with many great songs and many great comic performances.
Posted by Joe Janes at 9:33 AM 1 comment: Links to this post