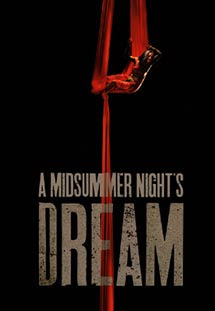 This impressive production of Shakespeare's A Midsummer Night's Dream was two years in the making in India and is currently on a North American tour. I saw it on the day news was breaking about the terrorist attacks in Mumbai, India. While no one was speaking about that, on stage or off, it was certainly in the air. How could it not be? A few of the actor's bios reference Mumbai as their home.

In a way, it made being a part of the show as an audience member particularly special. I know I personally felt more welcoming and wanted them to feel safe. It also made me more appreciative of the cultural gifts they were about to share. The cast should certainly be heralded for performing their show with great glee and gusto in the face of such turmoil. That act alone strikes at the heart of what theater is all about.

This Dash Arts production shows us how Shakespeare can be interpreted when embraced by another culture. Refreshing not to see a spin on Shakespeare that's different just for the sake of being different. If any playwright can bring multiple cultures together, it's the Bard. It is spoken in eight different languages, one of them English!

Sadly, this show is a mixed bag. It's a combination of Bollywood (without the sexual constraints), Cirque Du Soleil and community theater. It's a brilliant experiment weighed down by some just gosh awful acting. Where Shakespeare's story telling is universal, so is wooden one-note acting. The four lovers at the core of Midsummer's tale just don't have the chops to make us care about them. Their acting is so without nuance of emotion, that one really, really needs to be familiar with the story to be able to figure out what is going on.

Counter to them, though, there's some exceptional acting being done by a few others. Nick Bottom, played by Aporup Acharya, is an expert comic portrayal. Physical, concise and full of life and energy. Aporup, by the way, is one of the actors from Mumbai. His performance alone makes the show worth seeing. He and his company of rag-tag actors from the streets of Athens brighten up the stage every time they enter. Each characterization is clear, you get who they are and you know what they want. And they're delightful. 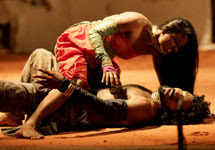 The duke and queen, played by P R Jijoy and Archana Ramaswamy, who double as the king and queen of the fairies, bring a lot of excitement and energy to the play. They are strongly masculine and feminine and provide an emotional anchor for the show. And Puck, as Puck should be, is a riot. Played by Ajay Kumar, he evokes a 1970's Ringo Starr in a red diaper.

And there's the spectacle of it all, fights and acrobatics, that is well done and if you get lost in the foreign language, well, just kick back and enjoy the fireworks.

Like I said, it is a mixed bag, but certainly worth seeing for the cultural aspects and for Bottom. Just bone up on the storyline beforehand.

" 'Hataraku Watashi,' a play that recently opened to positive reviews in Japan, features two actors that are what?"

21% said "CNN-style holograms"
- Ya know, aside from serving no purpose whatsoever, they weren't really holograms.

According to The Sun, a play with a difference has opened in Japan – it's cast is half robot, half human.

The robots play two depressed household servants who work for a young couple.

But the robots grow tired of their mundane lifestyle and long to break free and see the world.

The 20-minute piece titled Hataraku Watashi (I, Worker) was written by Japanese playwright Oriza Hirata and opened this week at Osaka University. 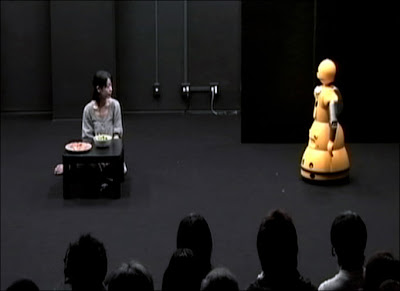 No one told this woman the actor's golden rule. Never work with animals, children or robots.
Posted by Joe Janes at 6:34 AM 2 comments: Links to this post