No pics from Shedd. They do this really lame thing for souvenir photos. They have a green screen you can stand in front of and they can insert various parts of the museum in the background. No props, no costumes, either. So, you can't even pretend to be feeding or riding a whale.

The food was much better than The Museum of Science and Industry, however. But the place is also smaller. We were out of there by 1pm. Not complaining, though. They have a lot of mouths to feed. The dollar-to-minute ratio is going to be skewed compared to the MSI.

I thought everything was cool, here. Especially the lizard exhibit and Wild Reef.

Today, The Field Museum during the day and then I go teach a class while my brother hits The Art Institute.

No promises, but I'll see if he wants to do a guest post for tomorrow.

"Recently deceased Angel Pantoja of Puerto Rico received his last wish when the funeral home arranged for him to be what at his wake?"

27% said "dressed in a chicken costume"
- A Furry Funeral?

18% said "made into a lamp"
- Someone took shop class in high school a little too seriously.

No one said "covered in Post-It notes from loved ones"
- If nobody takes this idea, I'm all over it. Did I mention I would also be naked?

According to The Associated Press, a funeral home used a special embalming treatment to keep the corpse of 24-year-old Angel Pantoja Medina standing upright for his three-day wake.

Dressed in a Yankees baseball cap and sunglasses, Pantoja was mourned by relatives while propped upright in his mother's living room.

His brother Carlos told the El Nuevo Dia newspaper the victim had long said he wanted to be upright for his own wake: "He wanted to be happy, standing." 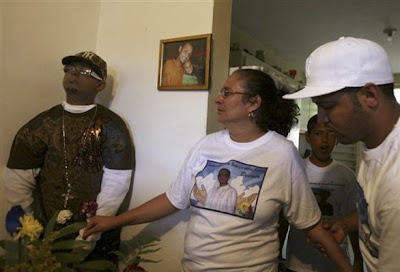 Not sure why they stood him in a corner, except to scare the crap out of anyone coming around that doorway. And behind a plant? It does make me wonder what they did with his hands. Hmm, add that to my Post-It note request.
Posted by Joe Janes at 5:10 AM 1 comment: Links to this post