I've been super busy lately, but not too busy to miss out on some shows that I think you might enjoy, as well. 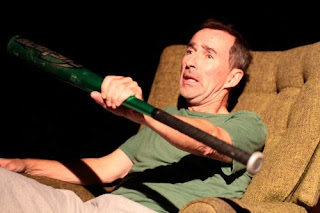 JET BLACK CHEVROLET written by Scott Barsotti. It's part of a two one-act program called It Could Happen Anywhere present by The Curious Theatre Branch at the Prop Theater. Jet Black Chevrolet is an expertly written exploration of self-imposed sleep deprivation brought on by the grief of losing a son. The acting is excellent and anyone who has ever experienced staying awake way beyond the point which your body stays on board for the venture will relate. There are enough loops and turns in the story that will keep you talking after the show about what exactly happened and I mean that in a good way. The second one-act on the bill, The Flowers Are Dead by Matt Rieger is not as successful. It tells the parallel stories of two small poverty-stricken families and the young teenage sons trying to break away from their familial constraints. The stories don't intersect until the end and does so in a way that, while artful, doesn't really make sense given the rational behavior of the two boys. IT CLOSES THIS WEEKEND!!!

CANDIDE directed and newly adapted by Mary Zimmerman at The Goodman Theatre is well worth the time and money to see. Candide, as a musical, has had a troubled history with many high caliber writers and directors taking a whack at taming this unwieldy story. While not 100 per cent successful at that, it does come closer than any previous incarnation. At times, the narration is too heavy-handed and too full of straight exposition and there are no breakout songs, save for the closing number, which had me up on my feet for a standing ovation. Anyone who has ever sat next to me at a show knows I am loathe to just dole those out willy-nilly. Still, this production is full of stunning imagery and comic performances. I also recommend reading the book. It is one of the best social satires ever written. 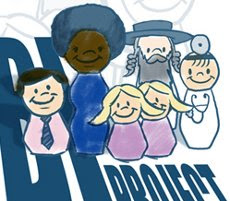 THE NAIROBI PROJECT presented by Blewt Productions at The Annoyance Theatre is hysterical. It is the presentation of a play commissioned by a Chicagoan for a Nairobi playwright to pen. The playwright is certainly well-intended and does his best to grapple with English as an almost second language. The actors commit full guns to their characters and the action. It's a good exercise in what happens when a cast follows the dialogue and stage directions to a tee. A good lesson for aspiring playwrights and sketch writers out there.

The 365 Omnibus Shows You Would Never See Unless You Knew Someone In The Cast: Remounted closed its four-show run at Gorilla Tango last night. Scott Olson and crew did a great job and reminded how cool a process 365 was - from the writing to the shows. There are no current 365 productions in the works, so if you're interested in putting something together, let me know.

Coming down the pike, Robot vs. Dinosaur is in the pupa stage of writing our next show for the spring and, I didn't think this would ever happen, but Don Hall and I are working on another two-man show. The clincher, we came up with a great title. Don Hall and Joe Janes Are Using This Show To Try To Get Laid. We're going to be diving into the world of dating and relationships from the perspective of two middle-aged men, one twice-divorced and one never married.
Posted by Joe Janes at 10:51 AM No comments: Links to this post