Kelly and Dan, who own and operate Gorilla Tango, are getting hitched this week and have closed up the space for the week. Congrats to them! Very nice folks, indeed.

"Six-year-old Max Dolan won a contest conducted by the Scott Polar Research Institute to name an iceberg. He won with which name?"

28% said "Hillary"
- Sorry. That iceberg name has already been named.

No one went for "Ice Cube"

According to the BBC News, an enormous Antarctic iceberg will be known as "Melting Bob" after being named by Max Dolan, a Hampshire schoolboy.

Melting Bob is three times the size of Greater London with a surface area of 1,985sq miles (5,141sq km) and had been referred to by a codename - C19A.

"The iceberg bobs in the water and is melting", Max said about his inspiration.

Here is a picture of Melting Bob doing neither. 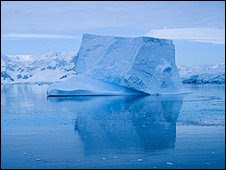 Posted by Joe Janes at 8:26 AM No comments: Links to this post