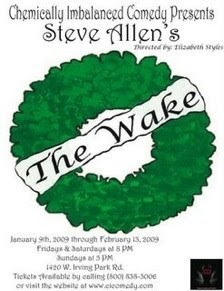 
Always beware the author's name above the title, I think. Especially when it is in a field for which the author is not well known (To be honest, I don't think it was Steve Allen's idea to bill himself that way, but a marketing move on CIC's part). The danger with plays written by well-known people is that they tend to be of a quality where, if the author didn't have a name, they would probably not be produced very often (Picasso at the Lapin Agile, anyone?) With this play, CIC could be carving out a niche for themselves as the presenters of plays written by celebrities known better in other fields. They previously have produced The Book of Liz by Amy and David Sedaris and God by Woody Allen. There's a play out there written by Dudley Moore and Peter Cook that must be on their radar.

So, Steve Allen is the draw here, but his hey day was quite awhile ago, so you may not know who the heck he is.

What you probably already know about Steve Allen
In 1954, he was the first host of The Tonight Show. He brought comedy into late night television five nights a week back when the show was done live and 90 minutes long! The show is still running, still recreating the format he innovated. David Letterman has often sited him as a major influence. During this time, he also did a Sunday night comedy show that for four years went head-to-head to TV juggernaut, The Ed Sullivan Show. Trace elements of both The Tonight Show and The Steve Allen Show can be seen today in SNL. On The Steve Allen Show, the show was carried by an ensemble of journeymen comedians, such as Don Knotts, Tom Poston, Pat Harrington and Louis Nye.

What you probably don't know about Steve Allen
The fucker never stopped. Up until his death in 2000, he kept churning out material on practically everything. He has published over 54 books on a wide range of topics. For a complete list of his books, click HERE. He has written music for films, stage and television, portrayed Benny Goodman in The Benny Goodman Story, created several other TV shows including one of my favorites, Meeting of the Minds, where he played a talk show panel host negotiating conversation between Ben Franklin, Cleopatra and Galileo.

So, what about The Wake? Well, out of the huge outpouring of Steve Allen's brain, only one play popped out. The Wake is essentially Steve's version of Lost in Yonkers, written twenty years before Neil Simon's play made it to Broadway. In the 1930's, the Scanlon siblings, who have never gotten along, are gathering from far and wide for the wake of their mother, Bridget, "one of the few saints on earth." As she lies in her casket in the cluttered Scanlon living room, family emotions run wild with each new arrival. This is a deeply human and heartfelt portrait of a big brawling family filled with foibles, kindness, old wounds, and passion.

The problem with The Wake, is that there are so many Scanlons and friends, that it's impossible to tell whose story it is. Allen spends many lengthy scenes with tipsy Irish-Catholics going around philosophising and near fisticuffing, that there's no real strong throughline an audience member can hook on to. The first act is so loaded with meeting people that near its end, I was wondering to myself what there was to come back to after the intermission. As if on cue, one of the characters blurts out to another,"What are you going to do about David?" Oh, okay, so that's what this is about...I guess. What is Belle, based on Allen's ever touring actress/comedienne mother, going to do about her little boy. A boy needs her mother, right?

And then the second act chugs along until it resolves that question near the end. Boom, a play, now Steve Allen can go on writing a ton of other things, including a series of hack murder mysteries starring himself. Hey, who hasn't wanted to do that?

The production itself, while uneven and saddled with a lot blocking that screams "the director told me to move here, now," has some strong performances, especially from Eric Bays and Even Absher as brothers at odds because one stayed home and the other writes books and travels. Tremendously enjoyable are Julie Mitre and Patricia Tinsley as the aging and doting McCaffrey sisters. They take two small roles with very few lines and simultaneously bring a level of gravity to the reality of being at a wake while bringing a lot of levity via their comic performances. Quite a trick.

All the while, though, as much a problem with the script as the direction, is there's never a strong emotional sense that "mom is dead." People refer to her as being an anchor for the family, but we don't feel or see the loss of her presence, except in some references to what the character Josephine Scanlon is going through off stage.

Basically, the best thing The Wake has going for it is its curiosity value, if you are wondering what kind of play Steve Allen wrote.

- "vibrate" isn't "silent"
- CIC is BYOB, but that doesn't mean you have to. If you bring wine, do you really need to bring stemware that you keep clanking together?
- if your phone rings during the final moments of the play, just quickly turn it off - don't answer it!
- And to the cute girl sitting next to me who had that ego-filled douchebag hanging all over her, well, he's a douchebag. And his "great" idea for a radio show on stage has been done before. Lifeline did it a few years ago with The Shadow, the same show he wants to do it with.

"Dr. Richard Batista, a Long Island surgeon, is divorcing his wife and wants her to give back what?"

24% said "His money spent on breast implants"
- Or, let him get custody of them on weekends.

According to The Associated Press, Dr. Richard Batista, a surgeon at Nassau University Medical Center, told reporters at his lawyer's Long Island office Wednesday that he decided to go public with his demand for kidney compensation because he has grown frustrated with the negotiations with his estranged wife. He said he gave his kidney to Dawnell Batista, now 44, in June 2001. She filed for divorce in July 2005, although he claims she began having an extramarital affair 18 months to two years after receiving the kidney transplant, his attorney, Dominick Barbara said.

She's had it for eight years, now, buddy. Maybe just split it down the middle.