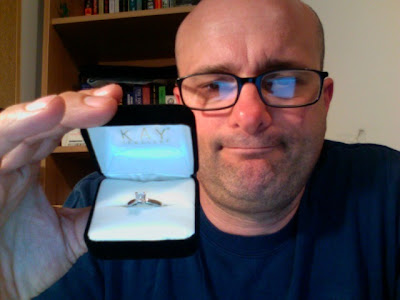 So, my ex-fiancee is off "finding herself." I hope, someday, to find myself, if only to have someone to split the rent and bills with.

Having an ex-fiancee means having to unload an engagement ring. 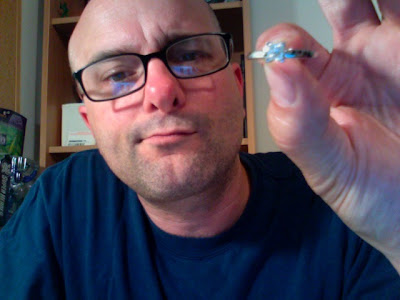 What better place to do that than here? 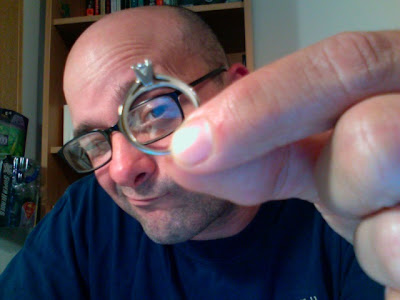 I like this ring. It's simple. It's classic-looking. She loved it. It was just what she wanted. In a ring, any way. I picked it out and paid for it all by myself. I shopped for it on a Wednesday, bought it on a Thursday, proposed on a Friday and showed it off at my Dad's 75th birthday party on a Saturday. 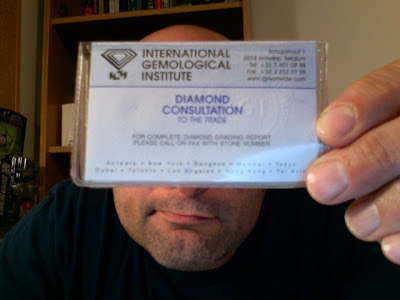 It's certified by the International Gemological Institute. 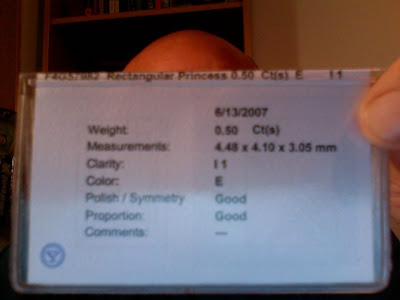 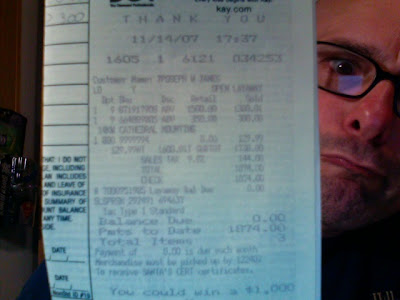 I think it's the single, biggest purchase I have ever made in one payment. I was simultaneously giddy and proud. I paid $1,874.00 for it. That includes a lifetime warranty. Now, there is no way I'll be able to get all that back. Diamond rings, apparently, are like new cars. Their market value plummets once you leave the lot. There's quite a mark-up. Taking it to a pawn shop or a jeweler in the diamond district would likely get me one third or one fourth of what I paid as well as make me feel like the biggest chump on the planet.

So, I'm just asking for half. $900. And I'll throw in the original receipt so you can keep working the lifetime warranty. If you are interested, shoot me an e-mail. joejanes1065@comcast.net.

I'm putting this out here first. Tomorrow, it goes on Craig's List.

METALUNA IN "THE WEEK"

So, I ran in to an acquaintance earlier this week and she said "Oh, my God! I have to ask. Are you playwright Joe Janes?"

"You're in a magazine I subscribe to called The Week!"

"Is that, like, in the Sunday Tribune or something?"

And she had it on her. The Week's motto is "All You Need To Know About Everything That Matters." It's described as a compilation of "The Best of the U.S. and International Media." And sure enough, on page 26, under "Arts," is a plug for Metaluna with snippets from Tribune critic Nina Metz's review. On this page, there are only five theatrical productions from across the country highlighted and, dammit, we're one of them!

Why, yes. I am playwright Joe Janes.

It's the last weekend for Metaluna! And your last chance to see Jen Ellison as "Rupert" and me trying not to crack up on stage because of it is Friday!

"Chinese officials had a little girl lip synch the song 'Ode to the Motherland' at the opening ceremony of the Olympics because the original singer was what?"

No one said "Sick with Asian Flu," "Actually a woman," or "Was working late at the sweat shop" (She only puts in 15 hours a day, like everyone else)

According to The Associated Press, one little girl had the looks. The other had the voice.

So in a last-minute move demanded by one of China's highest officials, the two were put together for the Olympic opening ceremony, with one lip-synching "Ode to the Motherland" over the other's singing.

So the pigtailed Lin Miaoke, a veteran of television ads, mouthed the words with a pixie smile for a stadium of 91,000 and a worldwide TV audience.

Yah, yah, yah. Before you go off on how image-obsessed China is and how cruel this was to the little girl who sang the song, consider this. Here's what 7-year-old Yang Peiyi looks like... 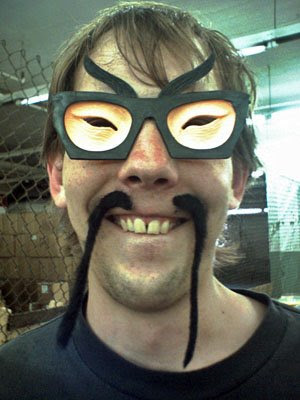 Too much lead in her toys, I guess.
Posted by Joe Janes at 5:36 AM 8 comments: Links to this post