Saw a sketch revue last night that shall go nameless, particularly because it is in previews. But it reminded me of how brilliant and lazy Chicago's comic minds can be when it comes to scenework. There were many scenes in the show that set up some compelling premises, only to bail on them rather than resolve them.

A common structure of the scenes I saw went something like this...

SET-UP - establish the who, the what and the where
PROBLEM - introduce the comic problem
HEIGHTEN - make the problem worse
SAY SOMETHING REALLY FUNNY, LIGHTS! - say something funny, hit the lights, play loud music

Does this mean they didn't explore possible resolutions and try to find the one that fit the scene best? They actually probably did, but there's a misbelief out there that every sketch in a sketch revue has to end on a big laugh (and just in case it doesn't, be ready with a quick blackout and loud music). Sketches do not have to end on big laughs. Great if it does, but I think it's more satisfying to end on resolution. Or find the big laugh in the resolution or right on the heels of the resolution. Finish telling the story. Scenes in a sketch revue are a lot like short stories. They take us to an interesting world and tell us a quick, compelling tale. The scenes I saw last night took us to interesting worlds and started to tell us compelling tales and then changed the subject.

Trust your audience. Trust they are as smart as you. Most of them are or are probably smarter.

Speaking of good story telling, we usually knock it out of the park at ISC. Tonight we experiment in numbers. Almost the entire company will be there. The number of board treaders could be thirteen to fifteen. We're going for telling a complete play without double or tripled casting lead characters. Hopefully, we'll be able to deliver big battles, angry mobs, full courts, etc. A real Shakespearean clusterphuk. It's at iO at 8pm. Click HERE for ticket info.

10% said "He grew his mustache to hide his hairlip."
- Heil Himphfler!

No one went for "He had a dove-shaped birthmark." or "He had six fingers on his left hand."

According to The Sun, an extraordinary account from a German army medic has finally confirmed what the world long suspected: Hitler only had one ball.

War veteran Johan Jambor made the revelation to a priest in the 1960s, who wrote it down.

The priest’s document has now come to light – 23 years after Johan’s death.

A friend of Johan's recounted his story: “In 1916 they had their hardest fight in the Battle of the Somme.

“For several hours, Johan and his friends picked up injured soldiers. He remembers Hitler.

“They called him the ‘Screamer’. He was very noisy. Hitler was screaming ‘help, help’.

“His abdomen and legs were all in blood. Hitler was injured in the abdomen and lost one testicle. His first question to the doctor was: ‘Will I be able to have children?’.”

Blassius said that when the Nazis swept to power Johan began to suffer nightmares and blame himself for saving Hitler.

I think its okay that he saved Hitler. He was a medic and doing his job. I do think he should have "accidentally" stepped on that other ball. Eunuchs aren't known for their aggressive behavior and tendency to invade other countries. 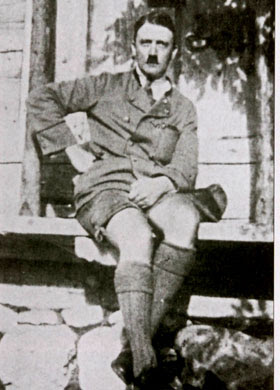 Posted by Joe Janes at 5:39 AM No comments: Links to this post