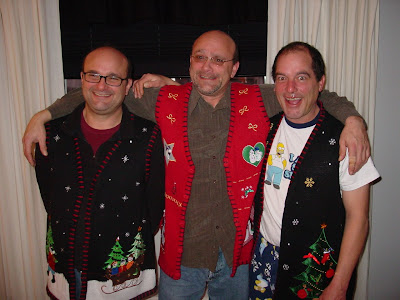 This is just before the bevvy of Playboy bunnies came over for martinis and massages. 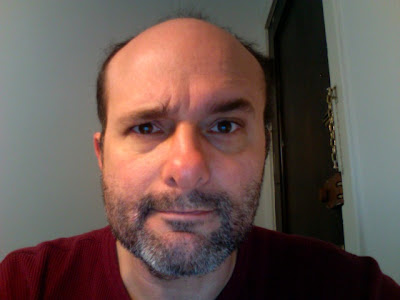 One week, two days. A lot of scratching.

NORTH BRITON THEATRE COMPANY - West Theater - I am not familiar with any of the three 9pm slot shows, but if I were going to take a chance on one, I'd see the North Briton Theatre Company from Manchester England and their show "Not the Footlights" for no other reason than to see what the Brits are up to these days when it comes to sketch comedy.

TEAM SUBMARINE - South Theater - Like Elephant Larry, these guys are becoming Sketchfest staples. Might be worth checking them out to see why.

"McCain campaign mascot Joe the Plumber has a new gig as what?"

40% said "Joe the Wal-Mart Manager"
- "Welcome to Wal-Mart. Meet me in the parking lot and I'll sell you my CD and book out of the trunk of my car."

20% said "Joe the Dancing With The Stars contestant"
- Really not so hard to believe. Look for this by the end of the year.

No one bit on "Joe the Barista"

40% got it right with "Joe the War Correspondent"

According to NBC affiliate WNWO-TV in Toledo, the Ohio man who became a household name during the presidential campaign says he is heading to Israel as a war correspondent for the conservative Web site pjtv.com.

He tells WNWO-TV in Toledo that he wants to let Israel's "'Average Joes' share their story."

This is a wonderful idea! Look, credible journalism is going down the toilet, so let's load up the bowl and give it a big flush. Other celebrities we should immediately make into war correspondents include: Danny Bonaduce, Richard Simmons, Jay Leno, Tanya Harding, that ShamWow guy, Gary Busey, and any non celebrity you see on any VH-1 show interjecting forced snarky stupid comments about inane things (except Brad).

Posted by Joe Janes at 5:40 AM 5 comments: Links to this post