This last weekend was the Annual Air & Water Show in Chicago. I always take delight when it meets with inclimate weather as it did this past weekend. Especially on Sunday when it rained all day long and the planes were grounded. I think Air and Water shows are nothing but big monster truck rallies in the sky. And water. My main beef is with the sky stuff, though. It's a huge waste of energy and incredibly dangerous - to the pilots and to the people the jets buzz over and the buildings they fly around. Insert your own 9/11 reference here.


10 THINGS, NOW CRANKED UP TO ELEVEN

Last Thursday, I posted 10 Things You Should Really Please Stop Doing In Your Sketch Revue - Now!!! I've received many positive responses and, from that, two additions.

11) Stop doing lazy song parodies. Usually, just one word is changed in the chorus and the rest of the song is unsuccessfully forced into fitting the scene. If you're not Weird Al or The Capitol Steps, stop it. Write an original song.


AROUND THE COYOTE WORKSHOP

This past weekend, I participated in an unusual workshop about collaboration with different artists from different media. I was assigned a comedy group, a musician and an artist to work with on a show for the Around the Coyote Festival. Our goal for the weekend was to form a basis for working together and set up a foundation for creating a thirty minute show for the festival October 12 - 14. The group is called Planet Terrence. I have met many of them at Second City as all of them do or have worked there on the service staff. They are all super smart and funny and we had a very good time. Our musician is Anu. A brilliant composer and I hope to link you to some samples of his work. The artist is Shawn Stucky. His style reminds me of Terry Gilliam with a stronger lean towards the surreal than the absurd, I think. What the hell do I know? I like his stuff. Check it out. Here's a sample I like a lot titled The Persistence of Loss.

The people who put the workshop together took very good care of us. Plenty of great food. I have noticed of late through Sketchfest and CIF that there are lots of companies more than willing to throw lots of food the artist's way. But Peroni? Here's one thing I learned this past weekend...

I do appreciate the gesture, though. 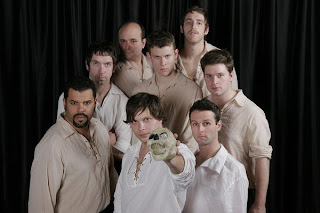 Two years ago, I met Blaine Swen (guy with skull) in a Michael Gellman project at Second City. He invited me to play with him in a Skybox run of The Improvised Shakespeare Company. Frightened to death of improvising in the style of Shakespeare, I jumped at the chance. Early in 2006, the show moved to iO where it has enjoyed a Friday night at 8pm run ever since. Due to my maddening schedule, I haven't been able to perform with the company at all this year. Until now. I'll be performing this coming Friday. It might end up just being myself, Blain and Ric Walker (man left of skull) performing a full two-act improvised show. It's going to be a blast, so come check it out.(photo by Rance Rizzutto)

My girlfriend and I are going to start looking this week for an apartment in Logan Square. She works in Oak Brook, so we're hoping the move southwest from where we now live will shave half the time off her daily commute. We'll find out today if it does or not. She's driving to there after she gets off work and I'll be meeting her for dinner. If you know of place near the Logan Square blue line stop opening up for October, let me know.

The news quiz was acting a bit funky over the weekend. If you get a "polls not available" message, try reloading the page.

"Because of the wars abroad, U.S. police departments are having to deal with what?"

100% answered "A shortage of armor"
- Nope. They have that in Iraq, too. That's why parents of soldiers were sending their kids bullet-proof vests. Never knew those were optional.

I would have thought it would be one of the following; "A shortage of manpower" or
"A shortage of delinquents to arrest"
- my experience with the thugs in high school is they either join the military or the police or parley their delinquent vocational training into a career. Keeping a part-time office in a county jail cell.

The correct answer is "A shortage of bullets"

According to reporter Estes Thompson and the Associated Press...

Troops training for and fighting the wars in Iraq and Afghanistan are firing more than 1 billion bullets a year, contributing to ammunition shortages hitting police departments nationwide and preventing some officers from training with the weapons they carry on patrol.

Now, if there's only some way to force this bullet crunch on gangs. Maybe they'll switch from drive-by shootings to tossing water balloons or eggs, like kids that age should be doing any way.
Posted by Joe Janes at 5:55 AM 2 comments: Links to this post