...that Dada is art come alive. And just like encountering another human being. Dada is full of mystery, complexity, pain and beauty. And, like the stories we tell ourselves, only means what we say it means.

...that there's something off in America about work and holidays. I no longer look at the holidays as a time for reflection and spiritual fine-tuning. It is time off. A chance to get caught up on that thing I've been writing and cleaning the bath tub. Or, more likely, get caught up on the shows on my DVR or in my Netflix queue.

...that president-elect Obama has already had more press conferences before taking office than Bush has had in eight years. This is a different kind of president and it's going to make the status quo deregulation corporate tool morons who are happy with our ship heading towards an iceberg very unhappy. Of course, thanks to the status quo deregulation corporate tool morons, that ice berg will probably melt by the time we get there.

...that I am strangely unaffected by the current economy. I'm paying my bills. Barely covering my ass. Just like always. All the news programs are recommending ways to tighten our belts. Hey, elite media! Stop flaunting your high falutin' belts in my face. Let me know when you have something to say that we, the beltless of America, can relate to!

So, I got a reward for $500. In my dreams. Not sure who it was from. Possibly an airport, except we were all outside standing in a line. Like some converted small town main street. I found a bank deposit bag full of something. I tried to hand it to someone who worked there, and he pushed it back. He thought I was trying to shove more work on him. When I finally got to the counter, the lady was very happy to see it and told me I would get a reward amounting to 18% of whatever is in the bag. That turned out to be $500 exactly (even in my dreams, I can't do math).

The lesson, of course, is look in the bag before you turn it in.

"According to a study done by the City University of New York, napping can boost your what?"

No one said "drooling"

According to The Huffington Post, "Not only do we need to remember to sleep, but most certainly we sleep to remember," is how Dr. William Fishbein, a cognitive neuroscientist at the City University of New York, put it at a meeting of the Society for Neuroscience last week.

Fishbein suspected a more active role for the slow-wave sleep that can emerge even in a power nap. Maybe our brains keep working during that time to solve problems and come up with new ideas. So he and graduate student Hiuyan Lau devised a simple test: documenting relational memory, where the brain puts together separately learned facts in new ways.

First, they taught 20 English-speaking college students lists of Chinese words spelled with two characters _ such as sister, mother, maid. Then half the students took a nap, being monitored to be sure they didn't move from slow-wave sleep into the REM stage.

Upon awakening, they took a multiple-choice test of Chinese words they'd never seen before. The nappers did much better at automatically learning that the first of the two-pair characters in the words they'd memorized earlier always meant the same thing _ female, for example. So they also were more likely than non-nappers to choose that a new word containing that character meant "princess" and not "ape."

So, there you go. When you see me hunched over my backpack on the El train, I'm working on my next blog post. Shove off. 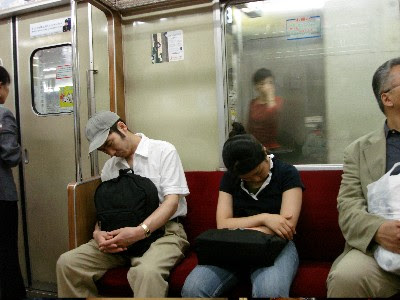 Posted by Joe Janes at 5:46 AM 2 comments: Links to this post