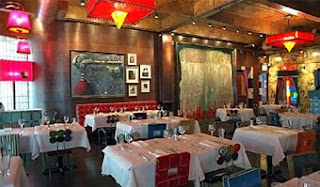 Today is my birthday.

In spite of such cause for massive celebration, this day has yet to be declared a national holiday (in this country, any way - I got Mexico on board.). I will be working all day. ALL day. Which means I had to do my pre-birthday celebration on Saturday.

It was a lot of fun. First, I had Robot vs Dinosaur's The Greatest Stories Never Told in the afternoon. Julie's parents and her niece came to the show along with Don Hall and Jen Ellison. Don came in with a huge present - wrapped in Christmas paper! - that turned out to be Guitar Hero III - The Legends of Rock! I can't wait to get my ax on and start serenading the neighborhood. Afterwards, we went to one of my favorite restaurants, Opera. Opera is a fun, eclectic an Asian-inspired restaurant (named after the Bejing Opera, as our well-informed server Rachel told us). Very vegetarian-friendly. My favorites were the morel mushroom won tons and the green tea tiramisu. In the picture above, we sat against the wall under the big painting of a key with a red tassel.

Then Don, Jen, Julie and I headed off to Dave and Buster's. Now, this sounded like a great idea to me. I haven't been to a Dave and Buster's in years and always had a good time. The thought of Don and I hopping on a Dance Dance Revolution machine cracked me up. Dave and Buster's sucked. It was crowded. Over-filled with inner city youth who no longer have roller rinks to haunt and low-income families who pour their baby sitter fund into dragging children around a crowded arcade. Half of the machines were severely run down and didn't work properly. We found the dance machine, but couldn't hear the music or figure out how to make it work for two players. People would rudely stand and block aisles or take the seats at games we were interested in, but not play the game. The way people attacked the ticket-spewing machines made me feel like I was at a starter casino. It's mind-boggling how much money people spend to amass those golden tickets to exchange them for crap worth a third or less for what was spent to get the tickets in the first place. Jen, Julie and Don generously gave me their tickets to buy something with. Amidst the spider rings and poorly stitched stuffed animals and novelty ties, I found a Proctor-Silex Food Chopper. I totally scored! And I had enough left over for a plastic kazoo so Julie can jam with me on Guitar Hero III. D&B's might have blown, but the company was great and I had a good time. And I left with a stronger appreciation for quiet celebrations with friends. 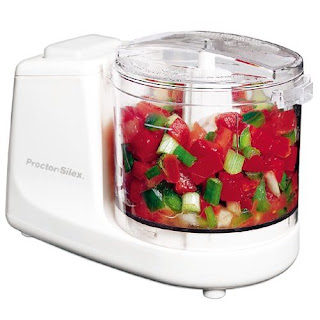 One of the best gifts the universe gave me for my birthday was the discover of vegan marshmallows at WholeFoods! Woo-hoo! Marshmallows, in case you didn't know, are a meat product. They are loaded with gelatin which is made up of the spongy stuff in animal snouts, bone marrow and ground up baby chicks (just kidding about the last part.). They are mighty tasty and I found them in the refrigerated section with the veggie cheeses and fake meats. They are made by Sweet and Sara in New York.

" A Florida-based petro company is looking for an alternative to soy and corn by using what?"

According to CNET News, a growing number of start-ups are betting against the dominant biofuel crops--corn and soy--and looking to sidestep the backlash against biofuels, which are being blamed in part for higher food prices and deforestation around the world. Melbourne, Fla.-based PetroAlgae says that it hopes to test a commercial system as early as next year.

Algae has a relatively high energy density compared to soybeans, which means more soy on more land needs to be planted for the same amount of fuel yield.

"What's happening is there has been more focus recently on the food-versus-fuel debate, more focus on the price of feedstock, and more understanding that using an agricultural-based crop as a fuel is not sustainable," said Michael Weaver, the CEO and co-founder of Seattle-area algae start-up Bionavitas. "We're seeing that reflected in the marketplace."

Now, if only our government would start weighing the difference between cost and yield, maybe they'll stop funding ridiculously costly fuel alternatives. And wars.

Posted by Joe Janes at 5:43 AM 4 comments: Links to this post