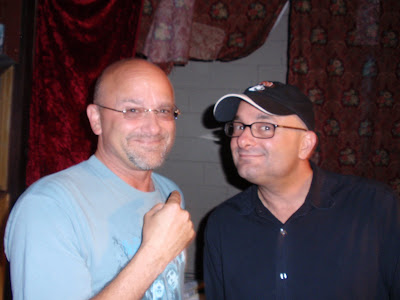 Don Janes and Joe Janes. I'm the one on the left. I mean right. Photo by Merrie Greenfield.
My brother is in town. Here we are at the closing night party of Metaluna. I'm excited that he's able to stay in town for a week and that he got to see Metaluna and hang out with folks that are very dear to me. The game plan this week is to cram in as many movies, museums and meals as we can. Don still lives in Port Clinton, Ohio where there is a bit of a void in all three of those areas, especially the culinary options. He's also become a healthier eater over the last year meaning he's actually encouraging me to take him to places like Karyn's Raw Foods. "Uncooked" at restaurants in Ohio means "frozen and not in the fryer, yet." 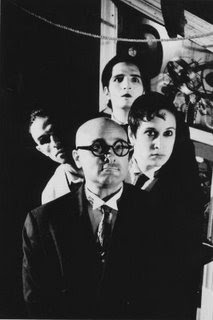 It's over. Mr. Hall wrote a lovely summation of it all over at AWG. It was a privilege to be in it with Don reprising his role as Mayor Armitage Shanks. Having Jen Ellison masterfully direct such a high class group of actors and crew was more than many playwrights ever get to see done with their work. I made new friends, deepened relationships with old ones and introduced some folks to Dada and vaudeville.

THE BS NEWS QUIZ OF THE WEEK

"Fort Hays State University debate team coach William Shanahan got into an argument at a competition with Shanara Reid-Brinkley, the coach from University of Pittsburgh. When Shanahan was at a loss for words, he did what?"

6% said "Punched her"
- This is what they refer to as extemporaneous.

13% said "Threw the lectern out the window"
- When words fail, destroy property. It's the American way.

20% said "Stuck his tongue out at her"
- And then he went and told his mommy.

60% got it right with "Dropped his drawers"

According to The Associated Press, an argument between two debate coaches that was caught on video was not the sharp-witted dialogue typically associated with college debate teams. Instead, the two traded profanity-laced barbs and one of them pulled down his shorts, exposing his underwear.

In the video, Fort Hays State University debate coach William Shanahan is shown arguing with Shanara Reid-Brinkley, debate coach at the University of Pittsburgh, during the competition's quarterfinals.

The argument, which appears to be at least in part about race, is punctuated with frequent cursing and name-calling. Shanahan, who is white, and Reid-Brinkley, who is black, scream criticisms about one another's body language during students' debates.

Hmmm, did they say video?

God bless YouTube. It's safe to play this at work, FYI. It's from a newscast that bleeped everything out. The original unedited tape can be found HERE.

Posted by Joe Janes at 5:44 AM 3 comments: Links to this post