Rep. Dennis Kucinich performed a heroic service for our Nation by introducing 35 Articles of Impeachment against President George W. Bush.

Rep. Kucinich thoroughly research and and documented every single article. Any one Article would be sufficient grounds for impeaching Bush and removing him from office; taken together, the case for impeachment is overwhelming and urgent.

Article I
Creating a Secret Propaganda Campaign to Manufacture a False Case for War Against Iraq.

Article II
Falsely, Systematically, and with Criminal Intent Conflating the Attacks of September 11, 2001, With Misrepresentation of Iraq as a Security Threat as Part of Fraudulent Justification for a War of Aggression.

Article III
Misleading the American People and Members of Congress to Believe Iraq Possessed Weapons of Mass Destruction, to Manufacture a False Case for War.

Article IV
Misleading the American People and Members of Congress to Believe Iraq Posed an Imminent Threat to the United States.

Article XXVIII
Tampering with Free and Fair Elections, Corruption of the Administration of Justice.

Article XXIX
Conspiracy to Violate the Voting Rights Act of 1965.

Article XXXI
Katrina: Failure to Plan for the Predicted Disaster of Hurricane Katrina, Failure to Respond to a Civil Emergency.

Article XXXIII
Repeatedly Ignored and Failed to Respond to High Level Intelligence Warnings of Planned Terrorist Attacks in the US, Prior to 911.

Article XXXIV
Obstruction of the Investigation into the Attacks of September 11, 2001.

Leading democrats have continued to speak out against impeachment simply dismissing it as "off the table and justifying the complacency with "too much of a distraction." Yes, murder, mismanagement, unnecessary war and being a douche bag are distracting. But this guy and his henchmen are criminals. Our founding fathers would have tarred and feathered them and ran them out of DC long ago.

Show your support for justice by taking thirty seconds to fill this form out at Democrats.com.

It will automatically send e-mails to your representatives in congress saying you support holding the Bush administration accountable for their crimes.

Look. I know. Kucinich kind of looks like a weenie. Like a sickly elf with a bad toupee. But he's been the only one in congress with balls enough to stand up for justice, America and the American people while Bush and Cheney have been trying to shove the constitution and the bill of rights through a paper shredder.

"Mayawati, the cheif minister of the northern India state of Uttar Pradesh, ordered officials to replace a statue of herself because why?"

50% said "It made her butt look big."
- Nobody told her that bronze adds ten pounds.

13% got it right with "It was shorter than the other statues."

According to The Associated Press, Mayawati, the 5-foot tall chief minister of the northern India state of Uttar Pradesh, ordered officials to replace a 12-foot bronze statue of herself with a larger one because it was 3 feet shorter than nearby statues of other leaders.

The combined cost of Mayawati's first statue and the one that replaced it last week was an estimated $950,000 — no small fee in a region of India notorious for its bad roads, spotty electricity and endemic poverty.

I think she has a future in America.

Here she is posing with her new statue. 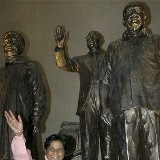