Theater Review: "Wilson Wants It All" 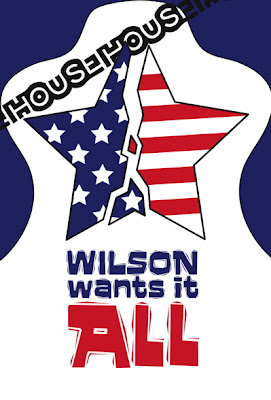 "Wilson Wants It All"
Written by Michael Rohd and Phillip C. Klapperich
Conceived and Directed by Michael Rohd
The House Theatre of Chicago
@ The Chopin Theatre
1543 West Division
Through March 27

"In the not-too-distant future, America is again on the brink of civil war -- this one a schism of values. A lone man decides the future of a nation as he manipulates the fate of twin girls, separated at birth and caught on either side of this escalating conflict."

The production looks great. It's sparse, but near monumental as it uses the main theater of the Chopin space close to floor-to-ceiling. The lighting, sound and costuming is all top notch. The cast is clearly talented and, at the very least, personable. These are folks you don't mind spending a few hours with.

The problem is quite simply the script. It comes across like an overloaded first draft, but probably suffered from being overwritten. Somewhere in the process, some brave company members needed to speak up and say, "Um, excuse me, guys... that doesn't make sense...we already covered that information...don't you think the audience will have already figured that out?"

Wilson Wants It All isn't so much a play as it is an explanation of a play. It tells us about a lot of things - how the country is torn apart, in a deep depression, how an assassinated senator was the best hope the country had for a bright future, etc. It tells us all these things, a lot, but never shows us. When a plot "twist" you can see coming is revealed, it's explained to death by the characters to each other and then the news team "chorus" comes out and explains directly to the audience what was just explained.

Occasionally, an actor will persevere and manage to have their characters show some humanity, but those moments are fleeting and quickly stomped out by a buttload of recaps or music that plays like a film score that doesn't trust the audience to know what they should be feeling at any given moment.

There are plot holes a-plenty. We first meet Wilson when he is the chief of staff of a golden boy senator who is running for president. He's known the senator, he says, for twenty years. We get the impression they are close to the same age, which would put them in their 30s. Thirty years pass as Wilson grooms the senator's daughter to run for office as soon as she meets the minimum age requirement. Later, he says he's been in politics his whole life, fifty years. How old is this guy? Shouldn't he be 70 or 80? Maybe he is and in the near future our world is fucked but we look marvelous for our age.

Characters do things that just don't make a lick of sense, but are convenient to the plot. Hope (yes, Hope), the senator's daughter meets a doppelganger named Ruth and within minutes they decide to swap lives without knowing anything about each other's personal details. A switch Ruth's mother, who lives with her, doesn't notice. Although, she does catch on long before Ruth's boyfriend, who even has sex with Hope and doesn't notice. As the story trudges along to its ham-fisted climax, Wilson gives Meredith, the mother of Ruth and Hope, a sealed envelope and tells her not to open it until "it's all over" and to "think of it like a love letter." At this point, it is clear that Meredith does not like Wilson or agree with what he's been up to, yet Meredith forgets to ask "When will I know it's all over?" and "What do you mean love letter, that's creepy?" And on top of that, she decides to open the envelope the moment she's been called upon to speak at a press conference. She reads it out loud without previewing it and without preamble. No one but her knows it was written by Wilson, the guy whose politics she opposes. It turns out to be a speech the he wrote for her for just such an occasion. Good thing it wasn't like a love letter. That could have been embarrassing for her.

Wilson Wants It All, like the future it portrays, might have something going for it if it focused more on people than on ideas and appearance.

"Times are tough. Donna McPherson of Brooklyn recently filed a complaint that someone did what?"

20% said "stole music from her iPod"(They gave her back all her Taylor Swift songs.)

No one went for "mowed her lawn then asked for money"

According to the Associated Press/NBC New York, Donna McPherson says she tied up Lexie, her 10-year-old Westie, outside a Park Slope supermarket "for two minutes'' while she bought milk.

She heard a "funny bark.'' When McPherson went outside, she found the little white dog shivering. His green wool coat, with leather trim and belt, were nowhere in sight.

Hmmm. Are you sure Lexie didn't just give a homeless guy a buck to take that crap off him?