...theater is fleeting. You toil, you create, you display, you destroy, you move on to the next thing. It's a lot like dating.

...that I used to be a full-fledged vegan. Damn you, pizza. Why do I love you?

...that art is at its best when it has an opinion and someone might be offended.

...that the first two years of high school were awful - crippled by shyness, self-conscious with acne, no sense of fashion. The last two years were a blast because I learned to surround myself with people whose company I enjoyed. They were creative. We explored music, movies and TV together, we shared a lot about what we were learning about the world. We had fun and weren't easily offended. Might be the most important lesson learned in those four years. That and photosynthesis. 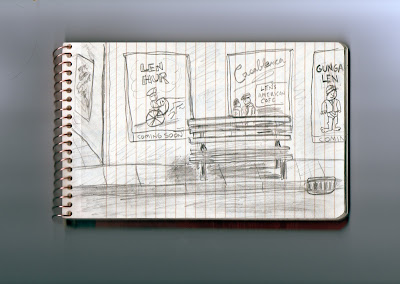 The set had a corner that represented a movie theater. This is my take on what the exterior wall might have looked like.

"Apple recently pulled thousands of adult-themed apps for iPhone including one from ChilliFresh, an Australian company, called "Wobble" which featured what?"

50% said "kangaroos having sex" - Did you see the pouch on that one? Crikey!

No one said "models falling on runways" - No. That's called "the news."

According to BBC News, thousands of apps with adult-themed content have been removed from the store since Friday although some, such as one from Playboy, remain. ChilliFresh is an Australian company that creates apps for the iPhone, including the recently banned Wobble, which allows users to add 'wobble' functionality to any picture. The firm markets the app by suggesting people can use it to wobble women's breasts.

This is an amazing advance in technology. Why does Apple hate the future? And why don't women see this as an example of how much we love and appreciate them? Where's that rock I was sleeping under...tiny...brain...tired...
Posted by Joe Janes at 8:53 AM 2 comments: Links to this post