Commence Whoopin' It Up! 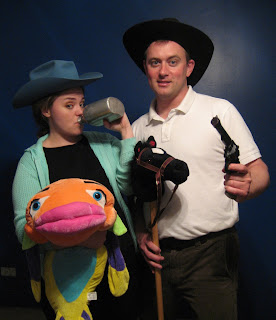 Just a helpful reminder to clear your calendar, maybe even buy your tickets early. We're gearing up for weekend two of The Greatest Stories Never Told...TOLD! TimeOut Chicago has a great feature where you can check out the restaurants in the area for a late lunch before the show or an early dinner after. The cool thing about being done by 5:30pm and out of the theater by 6pm is that it gives us at least eight hours at the bar before last call. That's Sluefoot Sue (Kate Lambert) and Pecos Bill (Mike Johnson) sharing a canteen full of whiskey and nails.

"A top Iranian judiciary official has warned against the destructive cultural and social consequences of importing what to their country?"

30% said "iPhones"
- It's not so much the phone as it is the long term binding service contract with AT&T that the Iranian government finds immoral.

20% said "American Idol"
- No, they're cool with it. The mosh pit reminds them of their funeral processions.

According to The Associated Press, a top Iranian judiciary official warned Monday against the "destructive" cultural and social consequences of importing Barbie Dolls and other Western toys. Prosecutor General Ghorban Ali Dori Najafabadi said in an official letter to Vice President Parviz Davoudi that the Western toys was a "danger" that needed to be stopped.

"The irregular importation of such toys, which unfortunately arrive through unofficial sources and smuggling, is destructive culturally and a social danger," Najafabadi said in his letter.

This has been an on-going battle, by the way. In 1996, the head of a government-backed children's agency called Barbie a "Trojan horse" sneaking in Western influences such as makeup and revealing clothes. Barbie is sold wearing swimsuits and miniskirts in a society where women must wear head scarves in public and men and women are not allowed to swim together.

Mattel really needs to hop on this. Burka Barbie, anyone?

Here she is with her friends Skipper and Krissy all ready for a fun day at the beach. 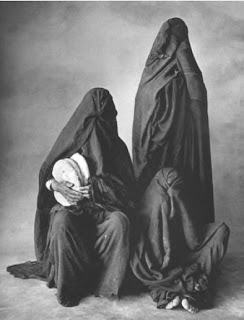