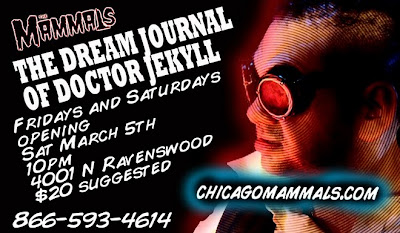 Shows by The Mammals tend to be very atmospheric, often taking a backseat to storytelling. They are in a unique style and you either dig it or you don't. If you are in that second camp and haven't seen a Mammals show in awhile, this is the one to come back and see. Bob Fisher, often a lone auteur, has challenged himself to collaborate with some of Chicago's finest writers. It really pays off. Most surprising to me is how funny and charming the play is. The tale is told to the audience via a museum curated by Professor Oliver Mastadon Peale (Jason Adams) and his assistant, Hunchfront (Vinnie Lacey) both delightfully evoking SCTV's Dr. Tongue and Bruno (John Candy and Eugene Levy). The acting is topnotch led by the triumvirate of Scott Barsotti, Gabe Garza and Skyler Schrempp as Jekyll, Hyde and Jekyll's mother, respectively. The production is a little steampunk, a little sideshow, a little horror. There's also more women in this Mammals show than any other I have seen and they are strong, memorable characters, especially Jekyll's mother, Alice and Jekyll's love interest, Eve (Sarah Scanlon). There is also music performed live by the actors and it is both beautiful and haunting. My sole complaint is that the show goes on about ten-fifteen minutes too long. The Professor has a lovely, riveting monologue near the end of the show. So good, in fact, the play could have ended there. Almost everything after seemed anticlimactic. But this is a minor complaint. It is still worth seeing. This is Chicago fringe theater at its best. 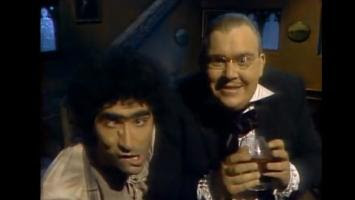 (Not Vinnie Lacey and Jason Adams)
Posted by Joe Janes at 5:47 AM No comments: Links to this post