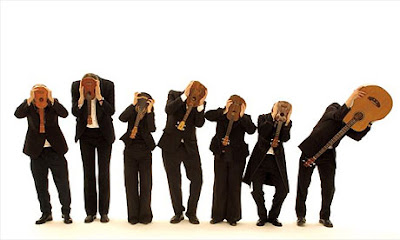 Juggling 50 directors and casts, this had to happen. There has been a scheduling mix-up. Belmont, featuring Michael Pieper and Peyton Daley, is in the Friday, 8pm show. NOT on Thursday. So, if you come this Thursday, in place of Belmont, you will see an encore performance of last Thursday's Baby Blue Sedan with Ryan Hake, Torian Miller and Johnathan Wallace, directed by J. Cody Spellman. And, if you come see the 8pm show on Friday, you'll see six plays instead of the usual five. More bang for your theater-going buck!

George Lyons is a recent directing graduate from Columbia University. He's done lots of stuff, except make sure I have his director's bio. George!

Kayla Mae Anderson is a recent graduate of Columbia College Chicago's directing program, where she directed, wrote and performed in many pieces, her favorite and most recent being Rag and Bone by Noah Haidle. Kayla recently participated in the 14 @ Stage773 festival where she performed in her original solo piece Of Mice and directed for the Naked 24 Hour Project. Look for her upcoming work at the side project's site specific play festival where she will be directing Ceremony by Mark Schultz and assisting Kimberly Senior at American Blues Theater's Waiting for Lefty.

Jay Steigmann is an Associate Faculty Member of the Second City Training Center, where she’s been teaching writing and improvisation since 2004. Steigmann has written and directed several plays (Funeral), Cabaret Shows (LEGS!), and countless sketch shows. Steigmann says thanks to Joe Janes and the crew of The Saddest Vacant Lot in All the World!

J. Cody Spellman is a Junior Directing Theatre Major at Columbia College. His previous works include assistant directing The Normal Heart, Equus, and Floyd Collins, where he also was the dramaturg. Right now he is directing a film with Postmark Productions, stage managing the Neapolitan Theatre Co's Off Chekhov Fest, and will be assisting Brian Posen on This Is Our Youth, as well as Dramaturg for Columbia's next mainstage show Splendora.

Kaiser Ahmed is the co-founding artisitic director of Jackelope Theatre Company. He co-directed The Last Exodus of American Men, Jackalope's inaugural production and directed the recent production of Slaughter City. Kaiser is also an Artistic Associate at The Artistic Home Theatre Company. A member there for many years, directed House of Yes, Memories from Dreamland, and Last Days of Communisn. He performed in their Jeff-Recomended Modigliani, assistant directed the Jeff Recomended Sweet Bird of Youth, Skin of Our Teeth, Look Homeward Angel and Juno and the Paycock (Jeff Nominated for Best Production.)

Why This Show May Be Of Interest To You...

The Saddest vacant Lot In All The World - written for Jay and her cast. This is a piece where the three actors and Jay told me the do tons of sketch comedy and broad characters and would like to try something different. While having it's moments of humor, it's also very sad, I think. It's about a woman visiting the spot where her abducted child's body was found a year ago. The title comes from a song by Grandaddy. While the play has little to do with the song, I love the mood it evokes. You can hear it by clicking HERE.

Custard with Ukulele - written for Kayla and her cast. This is where meeting with the director and cast before writing their piece really paid off. They all knew each other, but there's something they all didn't know. They all knew how to play the ukulele! When we discovered that, it was like a lightbulb exploding. I couldn't NOT use that. It's a fun, slightly surreal piece.

Baby Blue Sedan - This is an encore performance of a piece from opening night. This Tarrantino-esque glimpse into three hitmen waiting for their target, a colleague, is a lot of fun. Cody did a great job creating the tension and the humor the play needs and Torien, Johnny and Ryan look like they're having the time of their lives. Definitely one of the plays that meets and exceeds my expectations as the author.

Bunny - Was written during 365 Sketches as part of Columbia College's 24-Hour New Plays Festival. It is ridiculous. A senior in high school finds himself the at the apex of a love triangle while being aggressively pursued by a female vampire and a gay werewolf. Lots of fun while taking digs at Twilight.

Posted by Joe Janes at 6:12 AM No comments: Links to this post