The Chicago Sketch Comedy Festival is an annual event that celebrates the best in local, national and international sketch comedy. Over two weeks, 100 sketch comedy troupes will perform 125 shows. In addition to the performances, we offer workshops, networking events, and children's programming. The Chicago SketchFest is the world's largest sketch comedy festival, with hundreds of funny people in one convenient location - laughter guaranteed.

What the blurb fails to mention is that it is also madness. The energy in the Theater Building over the next two weeks will be through the roof. The lobby will be crowded shoulder-to-shoulder between shows. Shows won't start on time. Many shows are only performed once. If you hear about a great show someone saw and that you might want to see, it's probably too late. And it's a buttload of fun. And it's a festival, which means you'll see good shows, great shows and some really God awful shows. 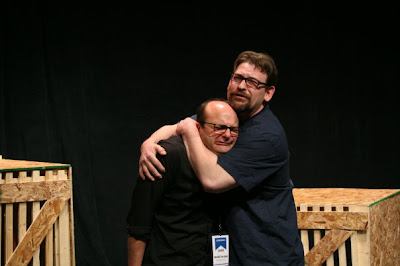 Don and I have performed in it the last two years and, sadly, opted not to put a show together this round mainly because of his ill-timed decision to go through a divorce with our director during the months we would need to write and rehearse the show. Bastard. It's always about him.

There are a lot of shows going on and, while it's impossible to have a clear grasp on each group and which one you should make sure you see, I'll throw a few suggestions out over the course of the next two weeks.

Tough choices, you really can't lose. Sketchfest is opening strong. There's a good show in each of the three theaters.

North Theater - KERPATTY - A two-person troupe made up of the just plain inherently funny Pat Dwyer and Erin Pallesen. It promises to be a "funplosion." It's also directed by Jen Ellison. So there. Kerpatty has a rare second and longer slot at Sketchfest next Saturday night. If you can see them then, do that, and go see one of these other shows.

South Theater - SOLO DUET - Another two-person show with Jet Eveleth and Lyndsay Hailey, two of the sharpest, funniest ladies in Chicago. It would have been great if they had teamed Solo Duet and Kerpatty up on one bill.

West Theater - DENISE'S BOOK CLUB - is pleased to present a scaled-down version of the group's latest production, "Le Coq Plastique." A great show, sad to see it truncated, but if you missed it before, see it now. You can read my review of that show HERE.

There's only one group playing that I'm familiar with and would go see.

West Theater - Hey You Millionaires is comprised of published humor author, a nationally produced playwright, and a high school English teacher. They create the kind of surprising, dark comedy that makes comedians laugh yet is accessible to everyone. My only cause for concern is that they are partnered with an LA group called Slow Children Playing, which was also the name of my Level 5 show back in '92. I thought it was a dumb name then, still do now. Google the name and you'll see how over used it is as a title. Doesn't mean they don't put on a good show. Could just mean they suck at coming up with names for themselves.

"A six-year-old boy in Wicomico Church, Virginia missed the school bus and tried to get to school over six miles away by doing what?"

6% said "scootering"
- Yes, he took that because his propeller beanie was malfunctioning.

No one said "He's six. He did nothing. He stayed home and watched TV." because, well, that wouldn't make the news, now would it?

87% got it right with "taking the family car"

According to The Associated Press, the boy, whose name wasn't released (but his parents' was! - Joe's note), missed the bus, took the keys to his family's 2005 Ford Taurus and drove nearly six miles toward school while his mother was asleep, police said.

He made at least two 90-degree turns, passed several cars and ran off the rural two-lane road several times before hitting an embankment and utility pole about a mile and a half from school.