...Rod Blagojevich is being controlled by a parasitic alien being that has latched on to his brain in the form of his hair. Here's a picture of a post-apocalyptic Blagojevich... 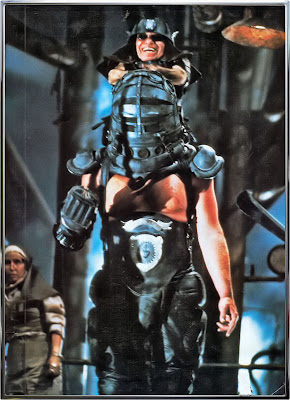 ...Blagojevich is the new Britney Spears. Yes, impeach his ass, but there's more important things to focus on such as the economy and war criminals telling everyone they're leaving Washington with their heads held high, which is good news for the snipers.

...if you live in Chicago and bitch about the weather, you're an idiot. That's like someone in Hawaii bitching about the warmth. Throw fashion out the window, dress in layers, leave early, stock up on hot chocolate and cherish the times you get to hole up in a cozy warm apartment.

...that when Don Hall writes "I Believes" like "...that the dual nature of reason balancing faith is both perilous and absolutely essential to the human experience. Without reason, we are bound to accept the authority of demagogues and zealots; without faith we cannot find the hope that things can be better than they are.", he's clearly reading too many books and needs to go back to playing with his PSP (pretty small penis).

...it's easy for me to take a shot at Don because he writes his "I Believes" first and then I cut and paste them here and do my spin on them. If he didn't, I'd still be in bed playing with my PSP (pretty spectacular penis).

...I really don't give a rat's ass about what Sarah Palin has to say about anything. Move on, "news" reporters.

"Researchers at the University of Cambridge in England report that men are more likely to have financial success if they what?"

46% said "are born rich"
- Well, it does help you become a republican president in the United States.

39% said "have big feet"
- This is just an indicator their mother was a duck.

No one said "have beards"

15% got it right with "have long ring fingers"

According to The Associated Press, researchers at the University of Cambridge in England report that men with longer ring fingers, compared to their index fingers, tended to be more successful in the frantic high-frequency trading in the London financial district.

The same ring-to-index finger ratio has previously been associated with success in competitive sports such as soccer and basketball, the researchers noted.

So, ladies, stop checking out my geisha-like feet when we meet and start looking at my gangly ring finger as I sort the bills in my velcro wallet!

Posted by Joe Janes at 5:27 AM 2 comments: Links to this post