...that as long as money is more powerful than votes, we'll continue to have a congress chock full of douchebags like Bunning. Unqualified, unconnected and uncaring. Corporations will back their hand puppets and we, the people, are the ones who will find some stranger's fist up our asses.

...that Jay Leno back on The Tonight Show with Sarah Palin as his guest demonstrates exactly why Conan should never have left and Leno should be boiled in pizza grease and thrown into the lion house at the zoo.

...that it's easy to lose one's faith in humanity and find oneself filled with cynicism and dread for the future. Then you hear a child's uninhibited laugh, a cat's purr, or a song like Black Joe Lewis and The Honeybears' Sugarfoot and you're glad to be around.

"5,220 people gathered on the steps of the Sydney Opera House over the weekend and did what?"

60% said "danced to Queen's 'Bohemian Rhapsody'" - No, but it could be correctly defined as a "flash" mob

No one said "sang Ave Maria"

According to Associated Press, about 5,200 naked people have embraced each other on the steps of Sydney's iconic Opera House for a photo shoot by Spencer Tunick.

Tunick, who is known for his nude group photos in public spaces, posed participants for more than an hour in a variety of positions.

Ya' know, the human body really is a masterful work of art, in the right lighting and after some photoshop. 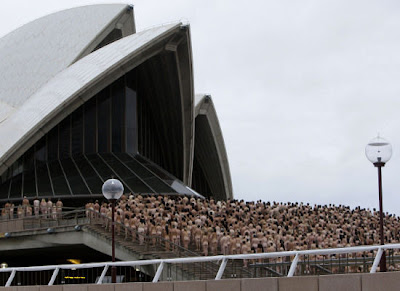