I have a lot of experience sneezing. Sometimes, I even like it. I really thought I had it down. Yesterday, I somehow bit the side of my tongue while sneezing. Not sure how I so grossly miscalculated my tongue-to-teeth placement while forcefully expelling air. First bit of meat I've tasted in twenty years. It has not swayed me from being a vegetarian. If I sneeze again and happen to be int he kitchen, I'll take a swig of teriyaki sauce first. 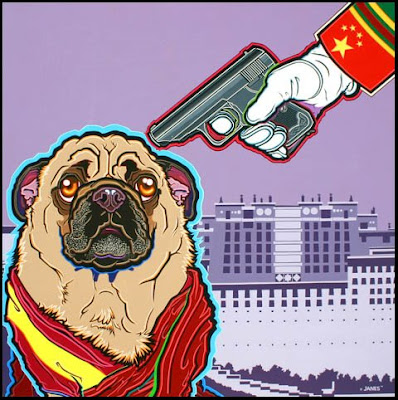 According to the Pop Arf press release accompanying the announcement...

Janes says that he was moved to complete the painting as the crisis in Tibet has continued to exist for several decades with very little response from foreign governments, even in light of the recent Olympic Games held in Beijing. "Many people may have forgotten that Tibetan culture is being purposefully destroyed by the practices and policies of China and that Tibetan monks still go missing today." Janes fears that if citizens of the world are not cognizant of the issue, then the United States and other countries will continue to go silent due to China's role as an major economic player in the world market. 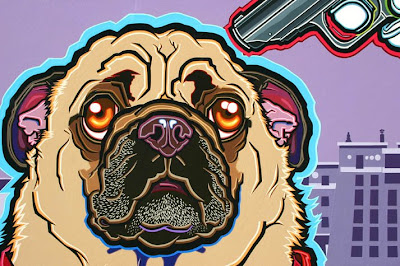 There's something about the vacant look in the eye of the dog that speaks to the pain and resignation happening in that country. And Nate is right, if the super powers of the world weren't up to their asses in debt to China, we'd be all over them on this.

I cannot wait. I am sick of this election. I get it. I know who I want. Let's go. The only fun I get is watching McCain's panicky scatter shot "try anything" approach to campaigning. His latest has been to actually have Joe the Plumber (who isn't a licensed plumber) at rallies, parading him out like a sports team mascot shooting McCain-Palin t-shirts out of a cannon at the crowd. Sure. Why not? He's already spoken more to the press than the GOP ticket.

"Carla, an angelfish at the London Aquarium, recently underwent an operation for what?"

25% said "a throat polyp"
- Didn't read the warnings on that pack of cigarettes.

No one said "a cold"
- No sneezing and lopping off pieces of tongue for Carla.

According to The Sun, Carla the angelfish has a life-saving op — to cure a hernia. The 10-in long creature was anaesthetised before vet Sue Thornton used a scalpel, needle and forceps to repair the hole. Water was pumped through her body and over her gills so she could breathe during the 30-minute, £500 procedure. She has now fully recovered. James Oliver of London Aquarium, where Carla has lived for 10 years, said: “I guess it’s a bit extreme to operate on a small tropical fish, but she’s almost family.” 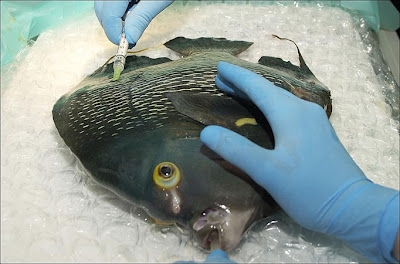 Posted by Joe Janes at 5:44 AM No comments: Links to this post