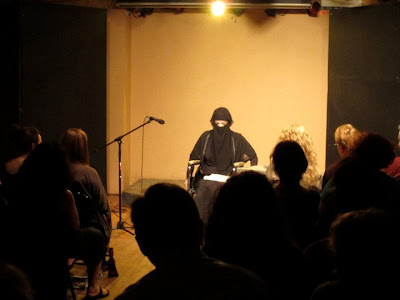 (Dana Black in "Burka Betty" directed by Kyra Lewandowski which will be in the Skybox shows.
Photo by Stephanie Douglass)
50 Plays went well. For an event that crammed 50 directors and their casts (of over 200) into two weekends at Strawdog's Hugen Hall, things could not have gone better. Next up will be the (The Best of) 50 Plays at Second City's Donny's Skybox July 30th- Sept 3rd. Saturdays at 7:30pm.

Many people asked me how this compared to 365 Sketches. Both had their challenges. 365 was certainly more grueling. The writing process was more grueling, at times, and when we presented the shows they were over 11 consecutive nights, including midnight shows on Friday and Saturdays. We were pretty loopy by the end of it. 50 Plays had its technical and logistical challenges simply because we bumped up from 26 directors to 50 and the number of actors increased. Scheduling techs and shows was a small nightmare. Creating theme-based evenings got thrown out the window quickly because there were too many scheduling conflicts to juggle. We (and by "we" I mean "I") screwed up scheduling the shows and it wasn't caught until we were between weekends. This resulted in an encore performance of Baby Blue Sedan on the second Thursday and the addition of Belmont to the second weekend's Friday 8pm show. It's all good, though. Both were great shows. I hope you get to catch some of the Skybox shows.

Don has a nice summation of the Strawdog weekends on his blog. Click here.
Posted by Joe Janes at 6:50 AM 3 comments: Links to this post