This is courtesy of Mr. Chris Othic

You can use this exercise to play with time and add some energy to a scene by causing havoc with it.

It’s a fairly simple exercise. Start small, with 2 or 3 characters, doing something very simple. One of them is for it and one is against, at a certain point, jump it to the future and continue the scene. You can jump it as near or as far as like, from a few minutes to years.

Have fun with it. You can develop the scene at times, or feel free to just jump to a scene that is only three lines, or even less. Just remember that one of the actions should be the impetus for jumping to a new scene and seeing what the consequence was.

The staged reading of Cheddar Moon went very well on Saturday. On Friday night, we had rehearsal. It might have been the first time I was in a rehearsal for one of my pieces in a room full of strangers. I felt very shy about them reading it aloud and felt more comfortable when they laughed about the piece and started having fun putting it together. It was directed by Ilesa Duncan and featured Gwendolyn Whiteside, Scott Stangland and Justin Cholewa. The actors are all very experienced Equity folks who knew what to do with my scene. The piece, I think, works best when it is very, sincerely melodramatic without any winks to the audience. The more in pain we see these people, the funnier it is. Ah, such is life. Any way, they kicked butt. I wish they were going to be a part of the full production when it goes up in October at Donny's Skybox, but all the pieces get recast for that. 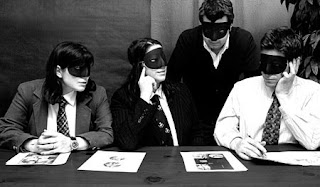 THE BREEDERS (photo by Chris Glass)

The Chicago Dramatists event ran until 4:30pm. My call to be at the Metro was, yep, 4:30pm. We were supposed to shoot with them at 5pm and be ready to go. The Metro is in Wrigleyville near Wrigley Field. The Saturday Cubs game would be letting out around then meaning the area would be crawling with traffic and drunk pedestrians. My plan was to hop on a bus and then the redline and then run to the Metro. I was okay until the bus I was on started heading south because of a detour. I jumped off and spent five minutes trying to hail a cab. By now, it fifteen til five and I was downtown. My cabbie was the best. One of those rare guys who loves his job. I asked him if it would be okay if I changed into my suit (for the video) to save time. He's like, "Why should I care? I only have three rules, no sex, no alcohol, and no smoking." Traffic was horrible and he got me to the Metro with five minutes to spare. I tipped him very well.

I ran to the alley near the Metro where we were shooting and the band wasn't there. They were running late. Whew! The director peeked in on their soundcheck and was worried. We were all worried that we were just a big inconvenience to them. We were told we only had five minutes with them. Shoot it and be done.

When they showed up, we braced ourselves. Kim Deal showed up first with Jose. She shouted out "I hate this wall! Tear it down!" And she burst out laughing. Kelley and Mando were behind them a bit. Mando had a video camera and they were documenting everything. Don't know why. Didn't ask. We had a camera, too, so I thought it was fair.

The Breeders were the nicest people on the planet. They were fun, they were having fun, they were easy to work with. The director told them what to do, they did it. We were done and they continued to hang out and chat. To the point of it feeling a little awkward. We were so expecting to be dismissed, that, internally, I was thinking to myself, "Sheesh, don't you guys have things to do?"

My only disappointment was that I didn't take the opportunity to chat with Kim or Kelley more. I was expecting to see them at the after show party, but they hightailed it home to Dayton. You see, we have a lot in common. We're all three from Ohio. I lived in Dayton for awhile. We're all three 47 and have a mother with alzheimer's. Small world.

The concert was great. Julie and I got there early enough to find a place along the rail of the balcony. Great view. The Montana Boys opened. I think they may have a branding issue with their name and they would probably mock me greatly for saying that. They're from Michigan and their songs are not the good time country honky tonk stuff you would expect. It's fun, crunchy smart, slightly edgy poop/punk. A good complement to The Breeders. Check them out.

The Breeders were fantastic. I liked that the didn't have the traditional band set-up with the drummer upstage center. They were all in a line across the front of the stage with Jose angled a bit towards the others stage left. They have a lot of great songs, but one of my favorite things they did was a cover of Happiness is a Warm Gun. They really cranked it up. When they did the song from our video, Walk It Off, a woman in a marching band helmet came out with cymbals and she looked familiar to me. It was Heather Albini, Steve Albini's wife. Steve is the producer of The Breeders last album, Mountain Battles. Heather works as a manager at Second City.

(sidenote: I said hi to her after the show and she told me her favorite Joe Janes' story. I was thrilled that she had one, until I heard it. At one of the Second City holiday parties a few years ago, I won one of the raffle prizes, but wasn't in the room. A lot of people shouted at Andrew Alexander to draw another name. "Screw Joe Janes! He's not here!" The prize? It was the grand prize they have every year. Second City pays your rent for a month. Where was I? In the building. Teaching a class. Working. For Second City. Because they schedule the holiday parties when there are classes. Now, had it been a lesser prize, like a ten dollar "gift certificate" to Flat Tops Grill, they just would have put it aside and given it to me later. Thanks, Second City.)

Anyhoo, small world. Heather looked great up there and I wish the director had know about it and used her somehow in the video. The video itself should be done in the next week or so and, of course, I'll share it with you. But just you.

"A Palm Beach Gardens mother and son have been barred from owning pets since when?"

50% said "They slaughtered their pot bellied pig on their front lawn"
- This is totally acceptable. It may be Florida, but it's still the south.

40% said "They successfully got their cat a social security number."
- I think the Social Security Administration would have picked up on the name "Mr. Whiskers."

10% said "The mother BBQ'd their iguana"
- Again. This is the south. You could BBQ and eat your right hand and it would be okay.

According to the South Florida Sun-Sentinel, a Palm Beach Gardens man and his mother, a middle school science teacher, are permanently barred from owning or possessing animals, a judge ruled Thursday after watching a short film of the man having sex in his bedroom with a German shepherd. The man, who was 17 at the time of the recorded activity, did not appear in court. The male German Shepherd, seven, is really 41 in human years and the court is considering prosecuting him for statutory rape.

I have probably said this hear before. People will fuck anyone and anything. If they can stick their thing into something or stick something into their thing, they will. But for God's sake, have some decency. DON'T VIDEO TAPE IT!
Posted by Joe Janes at 6:06 AM 2 comments: Links to this post