Looking for Poetry on the Ground

I am notoriously curious. It is in my nature. As a kid, I would always get in trouble for running ahead of everyone or wandering off. Especially at shopping malls and amusement parks. I would be a modern day parent's nightmare. I would be stuffed with Ritalin and strapped into a harness and leash. Thank God people didn't know how to properly raise kids when I was growing up.

I still have the same pull towards exploration. When traveling, I will always make time, usually early in the morning, to walk around the neighborhood. And no matter where I am, I always check out the sidewalk or the floor. I find some interesting things this way; a twenty dollar bill, a grocery list, a business card for stump grinding, and just a few days ago, a poem.

What's interesting about this poem is that someone didn't lose it. They left it to be found. I was in the alcove of a coffee shop when I saw an envelope on top of a stack of outdated free newspapers. Handwritten on the envelope, half printed, half cursive, was... 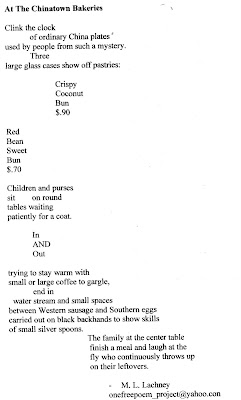 Is it a good poem or not? I'll leave that up to you. I like the last line. Go ahead an e-mail M. L. Lachney while I look around for another poem on the ground.


ONE MESSAGE. LOUD AND CLEAR.

Tuesday, March 4th - get your voice heard by creating a worldwide Cyber Shout. Post on your blog, message boards, comment sections, wherever you can, "Impeach Bush Now!"

What's interesting that I hadn't noticed before is how many videos pop up when you search "impeach Bush now." Didn't get your morning cup of coffee? Fear not, here's rebel comic George Carlin to wake your ass up.

"Police officers in Vancouver, Washington engaged in a chase with Stephen Ray Castor who was driving a what?"

25% said "Unicycle"
- But really it was the juggling while intoxicated that raised the police's ire.

No one thought it was a "Golf Cart"

And no one picked the right answer, either. "Lawn Mower"

According to The Columbian, Stephen Ray Castor, 53, allegedly broke a window of a man’s home in the 700 block of West 27th Street with a lawn chair, then led police on a 3-mph pursuit in a riding lawn mower about 5 p.m. Monday. It was a dangerous low-speed chase. The police were finally able to apprehend Castor by, well, walking up to him and grabbing him. Whew!