I used to do stand-up. Did it professionally for five years and spent most of that time on the road travelling all over the country, mostly in the Midwest. Once in awhile, I'd be booked with a black comic and sometimes, but even more rarely, a Hispanic comic. Another subset was the female comic and the fat guy.

What I noticed about these artists is that they tended to fall into one of three categories;

- a comic who doesn't deal with their ethnicity or gender and simply does what a stand-up does. Bill Cosy is an great example of this. He doesn't bring his race into his stand-up, except only mildly when talking about his childhood. Everything is about what most everyone can relate to; being a kid, raising a kid, going to the dentist, etc.

- a comic who uses his life as a resource and they just happen to be black, or whatever, so that's a part of the package. The brilliant Richard Pryor did this. He drew from his life and his stand-up dealt with junkies and hookers and winos and his struggles negotiating his way through life.

- a comic who knows what you expect from someone of his race and panders to those expectations. These comics tended to do great live on stage in a club on the road, but their act lacked any originality and while they cashed a check that night, their careers lacked sustainability.

In America, we have our pre-packaged prejudices based on our own history. True comedy artists will create either in spite of it or use it for a greater good, all the while trying to make people laugh.

A recent phenomenon in the stand-up world is the Muslim comic. Once the Bush administration threw down a Holy war and declared "those guys" the enemy, a new comic has emerged. How's it going for them? I don't know, but I'm going to find out this Thursday.

This is from the Illinois Humanities Council...

Can humor change the world? Join us as we laugh and talk about war and peace with this special performance and conversation with comedian Azhar Usman. Co-founder of the wildly popular “Allah Made Me Funny—The Official Muslim Comedy Tour” and born and raised in Chicago to immigrant Muslim parents from Bihar, India, Usman is always interested in “waging peace through humor.”

This event is presented by The Public Square and Th!nk Art an International Art Gallery & Policy Salon, as part of their ongoing War & Peace exhibit.

This event is FREE and open to the public. Reservations are required and can be made online, by email at events@prairie.org or by calling 312.422.5580. See you there.

"Maria Conneran's family in Rahyway, New Jersey received a visit from the police asking them to please do what with their snowman?"

83% said "place the carrot where the nose should be" - They didn't care. It was a baby carrot.

17% said "give it an opposite sex spouse" - It's only right in the eyes of Snow God.

No one said "make it less scary "

Or the correct answer, "put clothes on it" 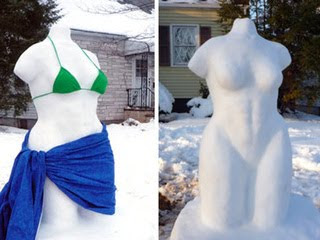 So, not your typical Frosty The Snowman, but I wish I had a magic hat.