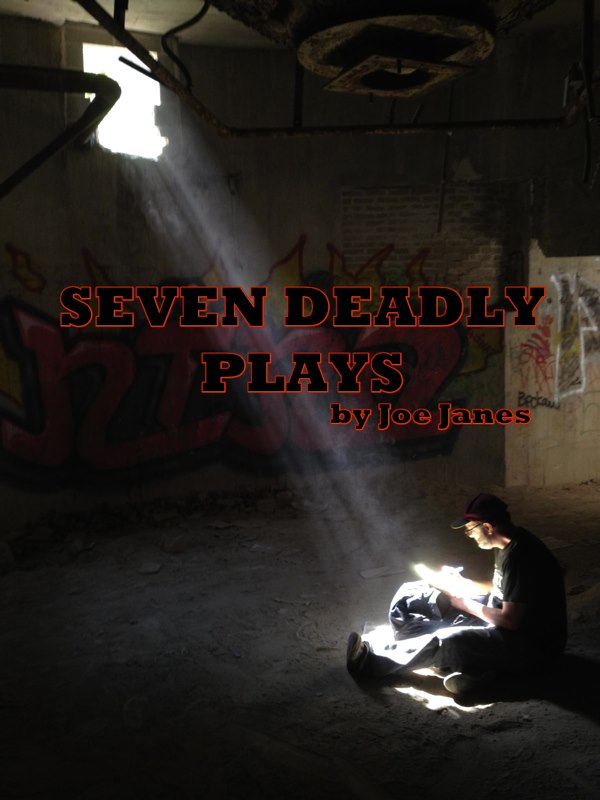 Well, I had an interesting week. Last Thursday, I took on the project of writing in and about places that have an element of danger to them. Why? Well, for fun, but let me give you the teacher-y angle. In writing classes, I really hate it when a student doesn't declare where a scene is taking place. "It can take place anywhere!" Sure, it can. But why not take the opportunity to place it in a compelling place that affects and heightens the scene? A pick-up scene in a park may not have the same oomph as a pick-up scene taking place in a fallout shelter. And while some really outstanding scenes can take place in a restaurant, living room or office, I wanted to explore new territory. It was also an opportunity to see how starting with a location affects the writing. And it did. All seven plays are very distinct. In every locale, I felt like a journalist looking for the story that wanted to be told.

How dangerous were the places I visited?

Allow me to rank them from most to least threatening to my physical well-being.

1) The Damen Silos - Easily top of the list. This place has been abandoned. The only safety measures is a chain link fence to keep your ass out. It's dusty, crumbling, dark, dank and very, very tall. We climbed up the inside of a silo to get to the top of one building. This was a straight up vertical climb in the dark. Once on top of that building, there are silo opening and chutes all over the place. One ill-planned step, and you take the express route back. We crossed an overpass built to connect it to a taller building. From there we went three stories up to the top on an external fire escape with steps missing. It was quite the workout. The only injury was banging my head on concrete as I tried to crawl out of the basement through a hole that has eroded in the side of the building. Still tender where the button on top of my ball cap tried to embed itself in my skull.

2) John's Tree - We had two venues fall through during the week. One of them was the bell tower at St. James Cathedral. They had some legal concerns about safety that just wasn't handled in time. Our last minute solution was a suggestion by the director, John "Screeching Weasel' Pierson. We climbed the tree in his front yard. I jumped at this because I literally had the thought about two weeks ago that I really wanted to climb a tree. I haven't done it in decades and I loved it as a kid. He has a great tree in his front yard, so that's where we went. And it was fun! But also high and I was relying on my less-than-stellar climbing skills.

3) Todd's Van - Ton McNeely offered up a ride in the back of his 1999 Mercury Villager as he drove around downtown Chicago. Sounded interesting and offbeat to me. Once we were in the van, I did have a moment of disappointment thinking it just wasn't dangerous enough. Then we got pursued by an angry driver downtown trying to pass us on a busy street. We almost doored a cab and hit a woman when she opened the cab door into traffic. The best part was when we went on Lower Wacker and got lost in the construction and ended up on a site. The van bottomed out at one point and Todd's poor Villager started overheating. We ended earlier than expected so Todd could cautiously get his van back to Indiana.

4) Bachelors Grove Cemetery - The cemetery itself, while creepy, was not at all dangerous and we never saw any spooky shenanigans. However, getting there and back was a task. We parked south of the cemetery and had to walk through 20-30 minutes of thick woods to get there. We saw some coyotes that left us alone. The main threat to our well-being were thorns and burrs. We were covered with those freaking burrs. Lots of scratches on arms and legs from this one.

5) Speedboat - The first adventure was on Seadog Speedboat cruises off of Navy Pier. To be honest, I felt perfectly safe. They are very professional and it was a lot of fun. We also had jets flying over in preparation for the Air and Water Show. So, really, there was only the potential for danger because of all the elements in place - water, speed, low-flying jets.

6) Urban Farm - One of the first places we decided to go to for me to write was Englewood. Essentially, the shooting mecca of Chicago. My girlfriend works for Growing Home which has an urban farm there. Growing Home is a wonderful, beautiful place. The people are super friendly. The places that surround it also look like cute little homes and we saw kids playing in their front yards. It was everything BUT the preconceived notions I had of Englewood. Getting there was slightly more dangerous. I had to wait 20 minutes for a bus at the redline Garfield stop. Had a guy there ask me if I was a cop. I laughed and he left me alone. I got on the wrong bus and went in the wrong direction and got a tour of some very depressed neighborhoods. I was going to get off the bus and cross the street to catch one going in the right direction and my fellow passengers recommended I NOT do that. Just stay on the bus until it goes where I want.

7) Funhouse - This was a result of another venue that dropped out at the last minute. We were all set for the Chicago Children's Museum. It was to be the one goofy location. Show me writing in the ball pit (Excuse me, Dino Pit, it's filled with dinosaur eggs. Not balls.), show me writing amongst kids running around, etc. Somewhere way up the chain of command, someone got wind of it and decided we were not the kind of folk they wanted hanging out around kids. Understandable. Will Clinger was with me. That guy is a jerk to children. Literally, fifteen minutes before I was scheduled to meet some of the actors there, I went to the Funhouse Maze at Navy Pier and they could not have been more friendly and inviting. And, you know, that maze is pretty cool.

The last script went out to the director last night around 11pm. They are going to work on it all day and perform it tonight with all the other pieces.

The show opens tonight. We have an incredible crew.

Produced by the incomparable Don Hall.

Shows are tonight, Friday, Saturday at 8pm. Sunday at 5pm. All at The Strawdog - Mainstage (Yay! Air conditioning.) 3829 N. Broadway between Sheridan and Grace. Easy to get to by bus or L - Sheridan. Parking on the street. Tickets are only ten bucks and available on-line at http://www.brownpapertickets.com/event/265713 or at the door.
Posted by Joe Janes at 7:16 AM 5 comments: Links to this post