From Russia With Loathe 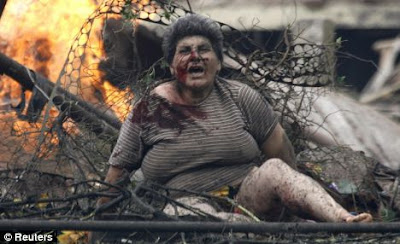 RUSSIA DECLARES WAR AGAINST LITTLE OLD LADIES
As you know by now, Russia has used a jack hammer when they could have used a stapler in its conflict with Georgia. Georgia seceded (thanks for catching the typo, Nat!) from Russia and became an independent nation in 1991. This has been a thorn in Russia's side ever since. Russia went through a near transformative period in the late 80's and early 90's until Putin was placed in charge. He and his supporters have effectively rolled back every reform Gorbachev started and are bringing back the good ol' Russia we know and love from our bomb shelter days in the 1950s. Ya see, the thing is, the reforms were a good thing for the people. It gave them a lot of freedom and liberty. That's a bad thing for other people who make a living keeping "the people" in check with fear. Sound familiar?

WHAT ARE THEY FIGHTING ABOUT?
Russia claims to be protecting their people in South Ossentia from Georgia. That's sort of like France protecting their people in Quebec. And it's quite likely Russia has been looking for any old excuse to invade Georgia and that this one will do. Russia has taken control of the whole country and are calling for Georgia's president to step down. Don't worry, though, I'm sure Russia has someone they think is qualified to replace him. They're good at dismantling other governments and putting in people they trust. Sound familiar?

BUT WHAT ARE THEY REALLY FIGHTING ABOUT?
Duh. Oil, of course.

This from The New York Sun...

BP operates the Baku-Tbilisi-Ceyhan pipeline, which transports 1% of the world's oil needs, or one million barrels a day from Azerbaijan to the Mediterranean....Georgia is a crucial link in a three-country energy corridor, vital to western Europe's oil and gas supply. The $3.8 billion pipeline is the only major conduit for Central Asian resources not under Russian control...."They need control of energy routes," President Saakashvili of Georgia said. "They need sea ports. They need transportation infrastructure. And primarily, they want to get rid of us."

Sound familiar? You can read the whole article HERE.

You want to stop wars? Hard to imagine one country invading another because they have all the wind.

"RAM-FM, a West Bank radio station has gone off the air due to a lack of funding. Its goal was to bring Israelis and Palestinians together by doing what?"

23% got it right with "Playing Michael Bolton and Air Supply"

According to The Associated Press, a West Bank radio station that sought to bring Israelis and Palestinians together to the tune of pop music has gone of the air because of a lack of funding.

RAM-FM had been broadcasting English-language talk shows and artists like Michael Bolton and Air Supply from a studio in the town of Ramallah since last year.

Yeah. Michael Bolton. Doesn't exactly inspire me to put down my gun. Unless they were trying to create peace through increased suicides. You want music that will inspire peace, put on Pink Floyd's Dark Side of the Moon and start passing out the joints.

Posted by Joe Janes at 6:09 AM 3 comments: Links to this post