When considering all the theater companies in America, including community theaters and academic institutions, there is a massive trade deficit when it comes to farce. While our amateur stages are littered with French and British sex farces so folks can giggle at seeing their dentist Jerry dressed in drag and running about the stage, we seem unable to send very much across the pond.

Not that we're not capable of it. I think because we have seen so much of it done poorly, we tend to relegate it to sitcoms and focus our stage energy towards, ugh, mounting stories that have already proven themselves on film.

Farce is one of the most difficult forms to write well. It is building a house of cards in a hurricane. One false move, one character not behaving in a way that makes sense, and the whole thing tumbles before the first act is over. The story and the script and be exceptional, but the performances can easily derail the proceedings. Wink and nudge too much and all believability and emotional investment is zapped. Under playing it can also keep the laughs from taking off.

I personally was very excited to see this show for a few reasons. I am a huge fan of Burn Notice and think Jeffrey Donovan is brilliant in that show. It is no surprise that he handles farce as deftly as he handles dodging bullets and chasing bad guys. When he, Mark Harelik and Spencer Kayden take the stage, it's a lesson in verbal and physical acrobatics. Mark Harelik is one of my favorite character actors. GEEK ALERT: He played Devore Inspector Kashyk on one of the better episodes of Star Trek:Voyager and played the Russian ballet obsessed Count Kurushu in the classic Angel episode Waiting in the Wings. You might know him best from one of my favorite satirical films, Election, where he plays Matthew Broderick's friend and fellow teacher who has an affair with student Reese Witherspoon.

And as much work that Harelik, Donovan and Kalember do to keep tightly twisting the rubberband-like plot lines, it's Spencer Kayden who steals the show. The last time I saw Spencer on stage was nearly twenty years ago in the early days of Too Much Light Makes The Baby Go Blind. Spencer seals herself up in the role of the hired french cook who walks away with many extra tips and laughs.

The plot itself starts off very much like any B-level American sitcom. Bernie (Harelik) is trying to rush his departing wife (Kalember) out the door so she doesn't cross paths with his mistress (Morgan). Just before leaving, she discovers that her husband's best friend Robert (Bernie's safety net alibi) is also coming over for the weekend. Unbeknownst to Bernie, his wife and Robert are also having an affair, so she changes her plans to stay.

Although it starts out as a typical imported sex farce, the stakes start to rise quickly and the methodical plot twists start flying. It's head-spinning, but in a good way. My only complaints are a very false note at the very end (post-climax) that I didn't buy happening with Donovan's character and, at times, the fight choreography comes across a bit stilted and calculated.

Nevertheless, good farce is hard to find and I had a great time. Well worth seeing.

THE RETURN OF WHEELCHAIR WEREWOLF!

Wheelchair Werewolf is a movie trailer parody by Joe Avella for which I did the voice-over. At Atom.com, WW is in a showdown. It's a weekly voter-based contest, and the winner gets played on Comedy Central. Voting ends soon, so get on it. Click HERE. Just takes a second to sigh-up to vote. We already contributed a million dollar to Rod Blagojevich to get him to vote for us.

"Le Trung from Canada was having trouble finding a girlfriend, so he did what?"

34% said "advertised on national TV for one"
- Didn't work until he threw in the ShamWow.

No one said "stole one"

According to The Sun, computer ace Le, 33, from Ontario, Canada, has spent two years and £14,000 building his dream girl. He had planned to make an android to care for the elderly.But his project strayed off-course. Le said: “Aiko is what happens when science meets beauty.” Robo-wife Aiko starts the day by reading Le the main newspaper headlines. The couple often go for a drive in the countryside, where Aiko proves a whizz at directions. And they always sit down for dinner together in the evening, although Aiko doesn’t have much of an appetite.

Le says his relationship with Aiko hasn’t strayed into the bedroom, but a few “tweaks” could turn her into a sexual partner.

A few tweaks and he'll be able to have sex with Aiko? Okay, time to turn this project over to the Americans. When it comes to sex and technology, we know our stuff. I know I can get those tweaks done with a mellon baller and a can of lube. 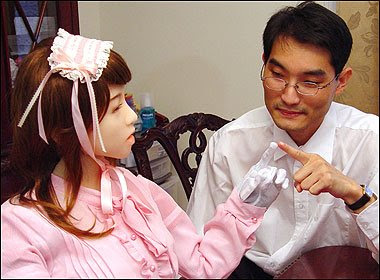 You build a hot looking robot slave and this is how you dress her? This guy really needs some sexy robot schooling.

Posted by Joe Janes at 5:34 AM No comments: Links to this post