These people are deliriously watching television. They use their radio as a bowl holder.

Not sure why I am so attracted to art forms that don't make anyone a lick of money, but I am. One of those longtime loves is Old Time Radio. It's a shame in this country that radio drama has all been swept aside for news and shock jocks. We seem obsessed with visual mediums and content to let our own imaginations atrophy. Listening to radio comedy or drama is not a passive experience. You're the Oscar-caliber art director and costumer and special effects expert. In fact, as a visual medium, it can't be beat.

I tell aspiring comedy writers they need to know their history. Comedy on radio in the 30's and 40's tended to be smart, well-crafted and damn funny. The best examples out there are The Jack Benny Show, The Fred Allen Show, Fibber McGee and Molly, The Great Gildersleeve and The Life of Riley. You can see the origins of the modern day "center and eccentrics" sitcom in all these shows.

I'm also a big fan of the spooky and the super heroes. The Shadow is one of the best and works best on radio because the hero, like Batman, is trying to scare the bejeesus out of the bad guys. The Shadow does it by getting into their heads. 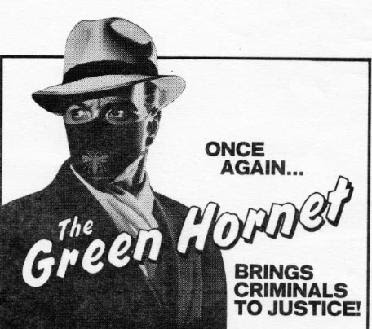 Another popular radio show was The Green Hornet, which was created for radio. The Green Hornet is Britt Reid, a newspaper publisher by day who by night goes out in his masked "Green Hornet" identity to fight crime as a vigilante, accompanied by his similarly masked Asian manservant Kato and driving a car, equipped with advanced technology, called "Black Beauty".

Want to get yourself some live Old Time Radio? More importantly, want to see me as the villain in an episode of The Green Hornet? Well, keep reading...

The Columbia College Radio Department presents An Evening of Radio Theater on Saturday, March 13th at 7:00 pm in the Music Center, 1014 S. Michigan Avenue in Chicago. Professionals from Second City (Hey! That's me!) join Columbia faculty and students performing classic and contemporary radio plays live on-stage including an episode of The Green Hornet and works by Ray Bradbury and Mary Higgins Clark. This performance also includes a debut of the radio series “Babylon, Wisconsin”, written and produced by Columbia Radio students. Tickets: Free and open to the public. Seating is limited. To reserve a seat, please call 312-369-8156.

"New Hampshire high school teacher Melinda Dennehy is free on bail after being arrested for doing what?"

66% said "teaching about religions other than Christianity" - Not a criminal offense...yet.

34% said "paying for a student's abortion" - On a teacher's salary?

No one went for "selling pot to students"

According to CBS-WBZ in New Hampshire, police say the 41-year-old English teacher sent four sexy shots of herself to a 15-year-old male student at Londonderry High School. The student, it seems, thought that was pretty nifty. Police say he forwarded the images to his friends.

Dennehy, of Hampstead, turned herself in to Londonderry police Friday. She is charged with one felony count of indecent exposure. The mother of two has since been freed on bail, but was ordered to stay away from anyone under 16.

Two things... This teacher totally made this kid's day, week, whole school year. Assuming she didn't look like any of my high school teachers. Part of her punishment is that she's not allowed to hang out with anyone 16 or under. Wow, that's really going to cramp her style having to only prey on over-the-hill 17 years olds.
Posted by Joe Janes at 6:53 AM 6 comments: Links to this post