A Movie About a Very Loud Handkerchief 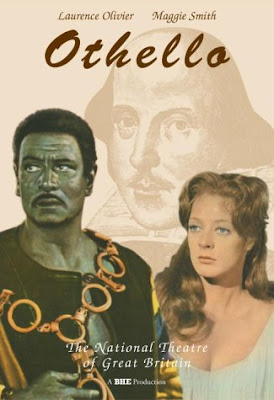 All moved and all out of boxes. Well, mostly. I find I need more things like shelves and perhaps a filing cabinet in which to put all sorts of papers and office supplies in the corner of my bedroom which is now my office. Until then, those items are in plastic bins and three small cardboard file boxes. But, I like the place. Which is cool. The last two apartments felt like temporary compromises whereas I can see myself comfortably staying here for awhile.

The neighborhood rocks for several reasons. Last night, we had an Improvised Shakespeare Company get together to watch Laurence Olivier's Othello from 1965. It took me a whole two minutes to walk there.

One of the reasons ISC is such a good show is because we all genuinely dig Shakespeare. We read him, see his plays and watch his movies. When we can do so as a group, it's even more fun. Think Mystery Science Theater meets iambic pentameter. I have seen several versions of Othello on film and on stage. This one is worth seeing because Frank Finlay's "Iago" is absolutely brilliant. Maggie Smith is a young, hot "Desdemona." The whole cast is really exceptional except for Olivier. The dude sucks in this. The weird shade of blackface aside, he is ridiculously over-the-top. Every Othello I have seen has Othello chock full of honor and dignity and he slowly descends into jealousy. But even then, there's a strong sense of pride in the man who is succumbing to his unbridled rage. Olivier plays Othello like a bi-polar freakazoid. He quickly, and very grandly, crumbles. The sets are very sparse probably because he kept chewing through all the scenery. His gestures so huge and voice so loud, I thought he was going to damage the inside of the TV set.

Othello is a great story and you'll find two far superior film versions with Orson Welles or Laurence Fishburne at the Moor's helm.

Cheddar Moon opened last Saturday to a sold out house at Donny's Skybox. The cast did an exceptional job. We were the last of the six plays and I think we leave the audience on a strong note. The snafu came when Principal Tate throws a damp jock strap at Nick's face to divert his attention. The cast never had an opportunity to work that moment out on stage. It worked fine, except the athletic supporter was too damp and left a small puddle on stage. Mike Johnson slid through it and lost his bouquet of novelty pencils, which play an integral part of the play a moment later. Without giving too much away, the actors recovered nicely, didn't lose anything in the fight scene, and I got to see a man stabbed with the bowl end of a soup ladle.

Three shows left. I strongly recommend buying your tickets in advance. You can get all the info you need by clicking HERE.

On Thursday last week, I asked...

"In the 1984 Miss Alaska pageant's talent competition, Sarah Palin did what?"

No one said "Gutted a moose"

58% got it right with "Played the flute"

"An accomplished flautist who has been performing for ten years. She will be performing "The Homecoming" as written by Nathan Hardy..."

She did not win the title. On older, more experience man won. She came in second.

Posted by Joe Janes at 5:40 AM 2 comments: Links to this post